Daughters of Mercury by Janet Brusselbach

Press release by Leslie-Lohman Museum of Gay and Lesbian Art 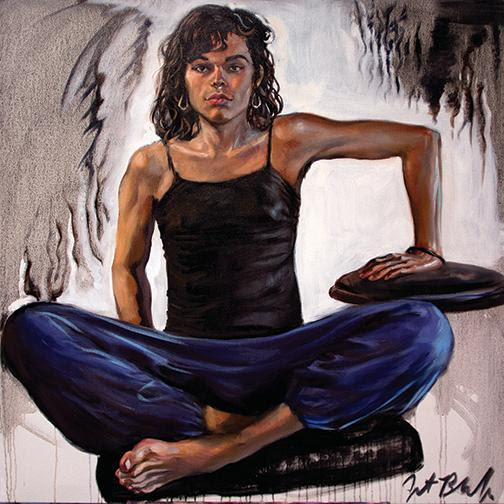 Janet Bruesselbach is an able white cis fem painter raised by scientists in Los Angeles, living and working in New York City. She was educated at RISD (BFA 2006) and the New York Academy of Art (MFA 2009), and was responsible for “I Hate Art” (2011) and “Teleportraiture” (2012). She crowdfunds projects to use what she is good at for the benefit of trans, queer, and marginalized people, with whom she has developed virtual intimacy.

Throughout 2014-2015, Janet painted 23 Daughters of Mercury, full-length, large-scale oil portraits celebrating the beauty of trans women (and people subject to transmisogyny) loved and admired by the artist. Each portrait was a collaboration with the subject honoring the construction of their image under the stresses of hypervisibility, and engaging with the tropes of the female body in figurative painting. Mercury is seen here as the feminine, fluid element and a divinity of transformation, communication, and cyborg embodiment. This exhibition constitutes just over half the series, including three paintings completed since the previous show in November 2015.