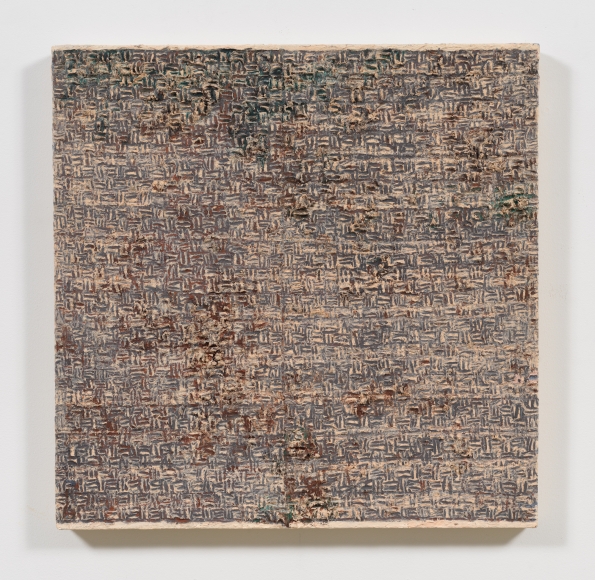 Alexander Gray Associates presents a curated selection of Harmony Hammond’s “Weave Paintings” (1973—1977), which embody an intersection of painting and sculpture that remains central to the artist’s practice to this day. With this series, Hammond broke new ground, claiming a queer and oppositional space in process-based abstract painting at the height of second-wave feminist activism.

Harmony Hammond moved to New York City in 1969, where she rejected her early training as a representational painter and began utilizing found fabrics and acrylic paint to create sculptural assemblages. She co-founded A.I.R., the first women’s cooperative art gallery in New York (1972) and Heresies: A Feminist Publication on Art & Politics (1976). It was during this early period of advocacy on behalf of female artists that she created her weave series. To make these paintings, Hammond applied successive layers of oil paint mixed with Dorland’s wax, incising the still wet surface with three-dimensional weave patterns that include points and burrs of paint. These pieces can appear dangerous to the viewer’s touch but are actually quite fragile. Hammond’s process of layering and marking the painted surface results in objects that reference and subvert textile traditions in craft and Modernism—from Anni Albers’ Bauhaus experiments to native North American basket-weaving. On this visual motif Hammond says, “Weaving, of course, implies the grid, and the grid can suggest weaving. If you think of stitching as marking, and marking in gridded space, then before you know it, you are into pattern and decoration…I was always very interested in the notion of the stitching as a repetitive gesture – reflecting the repetition in women’s lives – and a connective gesture – a means of piecing together or building ‘wholes’ out of fragments.”

Hammond’s creation of tactile surfaces in works such as Green Veil (1975) result in what she calls “fugitive” color that is fluid and difficult to place. She asserts her paintings “perform queerly” due to her utilization of mutable and inexact “near monochrome.” In her practice, abstraction does not preclude social engagement; her weave paintings epitomize an integration of political content into rigorous formal experimentation, an approach that art historian Julia Bryan-Wilson describes as “the space of the between.” This concurrent embrace and subversion of modernist traditions is apparent in her use of lozenge-shaped canvases in paintings such as Letting the Weather Get In (1977). As the artist describes, this configuration “was lumpy and bumpy, irregular – presencing the body. When you’re incising into the painting surface, you’re incising into the body…. What was happening on the painting’s surface with its subtly curved edges, was mirrored in the shape.” She makes specific reference to the female body; the purposeful irregularities of the paint reflect the imperfections and nuances of each woman’s skin. In building up thick impasto layers of paint, Hammond armors and empowers the skin-like surface. This group of work intentionally invites queer and feminist content by positioning the painting as a site of negotiation between what exists inside and outside the picture plane. Her recent bandaged and wrapped canvases, still in near-monochrome, mimic and expand upon the patterns of the incised surfaces of these pioneering earlier “Weave Paintings.”