Cassandra’s Sisters – Painters of the Future Lift the Curse 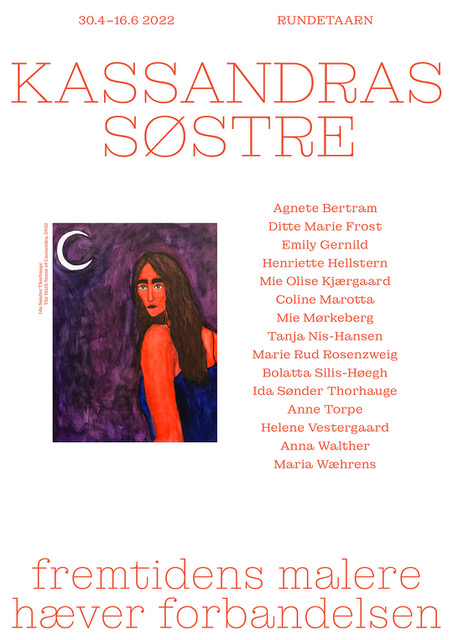 Tower Talk: Meet founders and curators Henriette Hellstern and Anna Walther in conversation with artists from the exhibition May 4th 5pm

The group exhibition [Kassandras søstre – fremtidens malere hæver forbandelsen] / Cassandra’s Sisters – Painters of the Future Lift the Curse opens on Saturday 30 th April. 15 contemporary female artists have created diverse works within painting – in a broad sense, virtuoso, and pastose, and with the mythological character Cassandra as a central figure. The exhibition is a tribute to painting, a sisterhood of solidarity, and a reinterpretation of Cassandra’s destiny.

The painting has been deemed in and out of fashion, been said to be stone-dead or alive and kicking. Female artists have mostly been suppressed and barred from art history and academies. However, increased focus and initiative suggest a disruption and a breakthrough for contemporary female artists – as well as those, who have been written out of art history. Now, art history is up for debate. The curators are on a mission when they invite reinterpretations of the Greek myth of Cassandra.

A selection of 15 contemporary female artists have been invited to create works relating to the theme of ‘truth and consequence’, taking the myth of Cassandra as a starting point. Cassandra was an attractive princess and was given the gift of prophecy by the god Apollo. However, Apollo expected the favour to be repaid with her love. But Cassandra did not reciprocate Apollo’s interest. The rejection enraged Apollon and he cast a curse on her which meant that no one would believe her prophecies. The artists approach the myth from each their own angles and interpret and build upon the myth’s many perspectives, as well as Cassandra’s character and struggles from a more contemporary perspective.

With their strong narrative sense, painting skills and insistent sympathy for the visionary, but ostracised, Cassandra, the artists show how the ancient myth still carries importance today. Apollo-men are unfortunately not only present in ancient Greek literature, but the artists stick together, both in personal experiences and in their resistance to structural challenges in the art industry of today. They have produced imageries characterised by anger, loneliness, consolation, reconciliation, spirit, solidarity, integrity, sovereignty, resistance, and much more, as they approach the myth of Cassandra and the painting from their own perspectives in the historical surroundings of the Round Tower’s Library Hall.

The organisers of the exhibition and the network of Cassandra’s Sisters are Henriette Hellstern, Anna Walther and Helle Moalem. The exhibition is curated by Henriette Hellstern and Anna Walther. It presents both established and younger artists. In collaboration with art advisor Helle Moalem, the curators also wished to, on top of the exhibition, establish a community, a network and an exchange among colleagues in an aim to initiate more collaborations and synergy between artists, and to lift each other into a sisterhood, who paint each other better.

In connection with the exhibition, a publication with an introduction by the curators Henriette Hellstern and Anna Walther, art advisor Helle Moalem, and philosopher Helene von Tabouillot, will be published. The artists’ biographies are written by art historian Natalia Gutman, graphic design is by Anders Gerning, and photographs are by Rine Rodin.