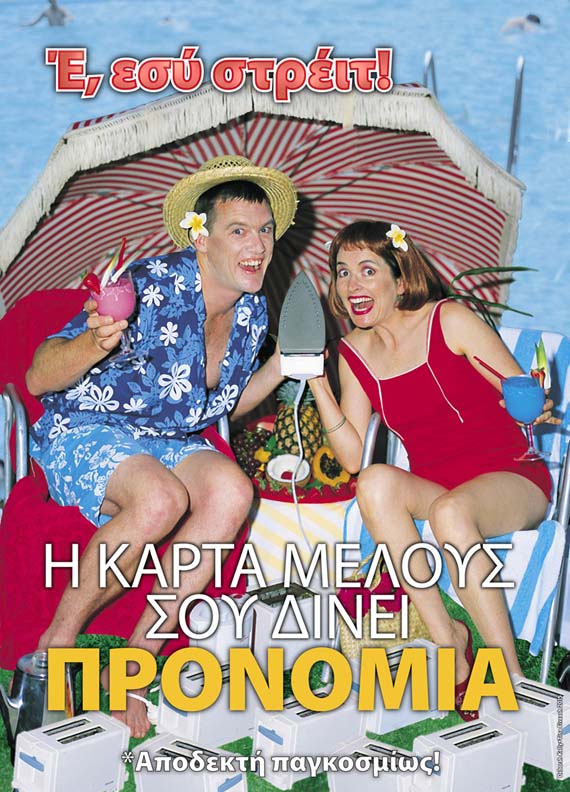 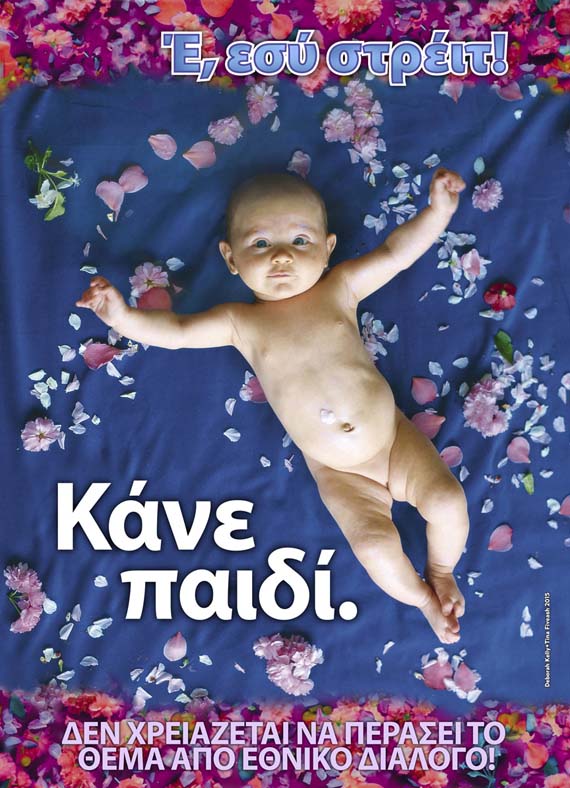 Deborah Kelly is a Melbourne-born, Sydney-based artist. This is her artist statement about the art work:

After three decades of gay, lesbian, bisexual and transgender activism in Australia, defence of heterosexual hegemony remains unspoken and entrenched. Heterosexuality is horizonless, unselfconscious, invisible as whiteness. While basic human rights gains have been won for non- heterosexuals, heterosexuality still confers first class citizenship in many areas of law, relationships and social status. Meanwhile, much of the queer community is depoliticised and lulled into passivity.

The artists wanted a provocative and seductive work to appear throughout the city, in billboards, bus shelters, free postcards and in the news. Many people helped the dream come true.

Hey, Hetero! returns the gaze at heterosexuality: the privileged sexuality which makes gay, lesbian, bisexual and transgender movements both possible and necessary. In the form of simulated mainstream ‘advertisements’, the artwork invites heterosexuality into public discourse. We’re surrounded, and scrutinised minutely, by state, church, our own nervous neighbours. Hey, Hetero! seeks to interrogate the great silences that support the solidity of hegemony, to manifest the invisible, to address directly those who need not speak their name.
By simulating advertising and occupying its spaces, the project seeks access to the public attention accorded to commercial messages and denied to ‘Art’. Hey, Hetero! is a trojan horse, an agent provocateur, a wolf in sheep’s clothing. It mimics and destabilises the conventions of advertising. This work has appeared in illuminated bus shelters, on street billboards, on free postcards, in newspapers, on radio, and in print publications and text books around the world.

Hey, Hetero! appeared at the 2001 Feast Festival in Adelaide, in ‘Week without Violence’ in Wellington, New Zealand in 2002, throughout Melbourne in 2002, and as broadcast TV ads with Melbourne’s Channel 31. It was the headline visual arts project of Glasgay in 2006, appearing throughout the Glasgow subway system, was shown in galleries in Berlin and Nicosia, Cyprus in 2007. In 2011, 1,500 copies of the works were plastered around Claremont California by students there, and in 2015 it was invited to participate in the Thessaloniki Biennale by the Greek State Museum.

The project is taught in schools and tertiary institutions across Australia and internationally in various disciplines: anthropology, sociology, visual arts, media/ communications and cultural studies.

[The works (from top to bottom of this page) read:
Hey, hetero*! MEMBERSHIP – Priviledges. *Accepted World Wide!
Hey, hetero! Have a baby. NO NATIONAL DEBATE
Hey, hetero! When they say family they mean you!
Hey, hetero! With your eyes closed. NO FEAR! NO DANGER! NO WORRIES!
Hey, hetero! get Married BECAUSE YOU CAN!
Hey, hetero! BASHERS TARGET – STRAIGHTS in 0.05% of sexuality-motivated attacks] 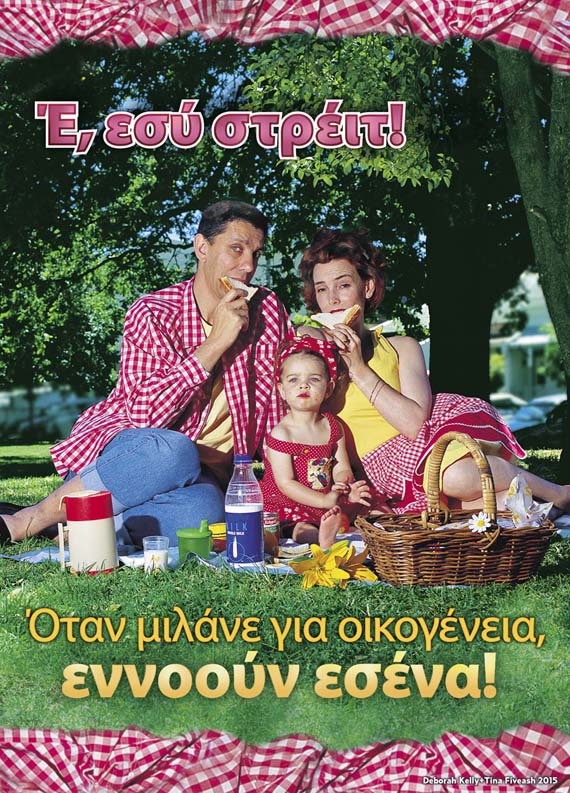 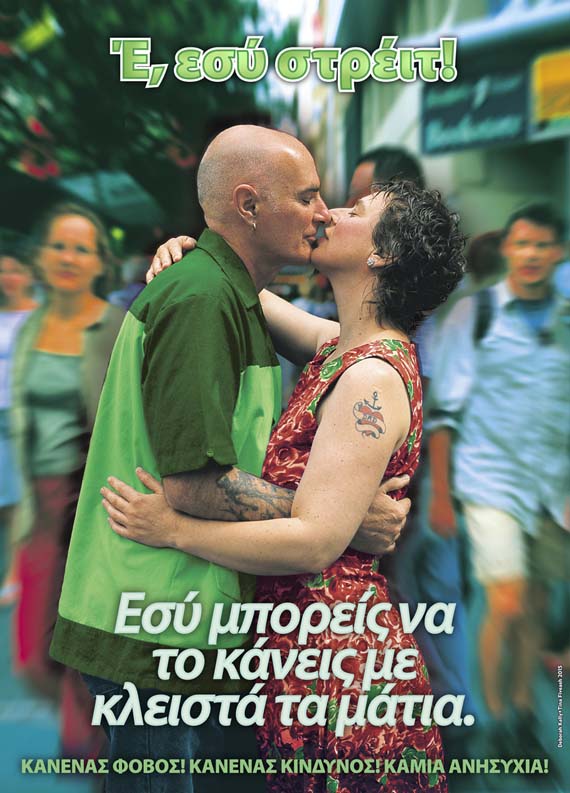 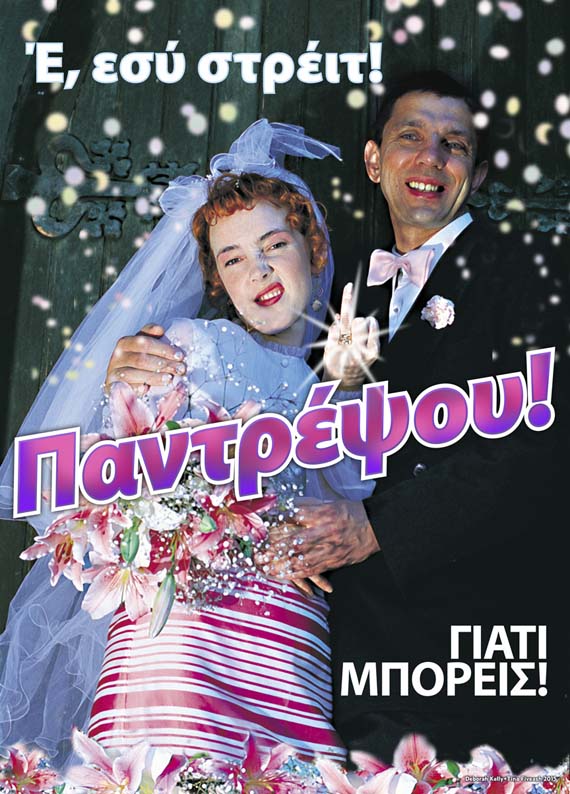 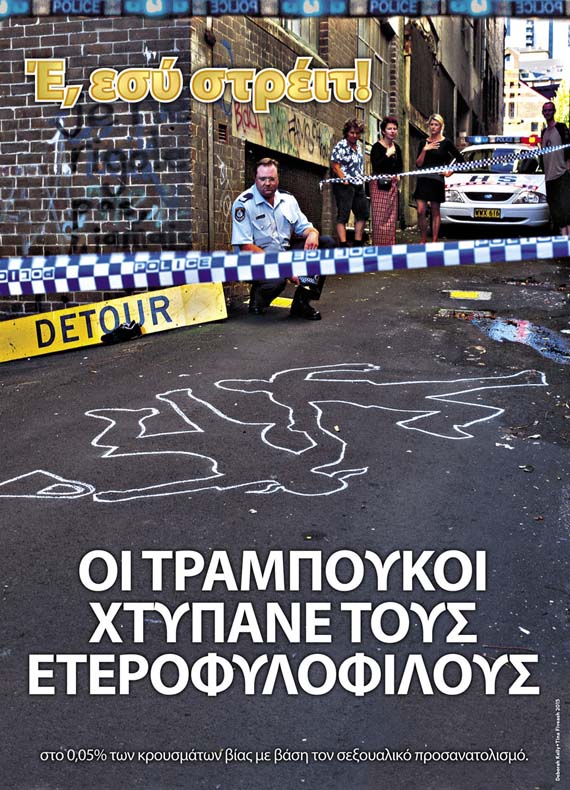