Press press release by Alexander Gray Associates and the artist 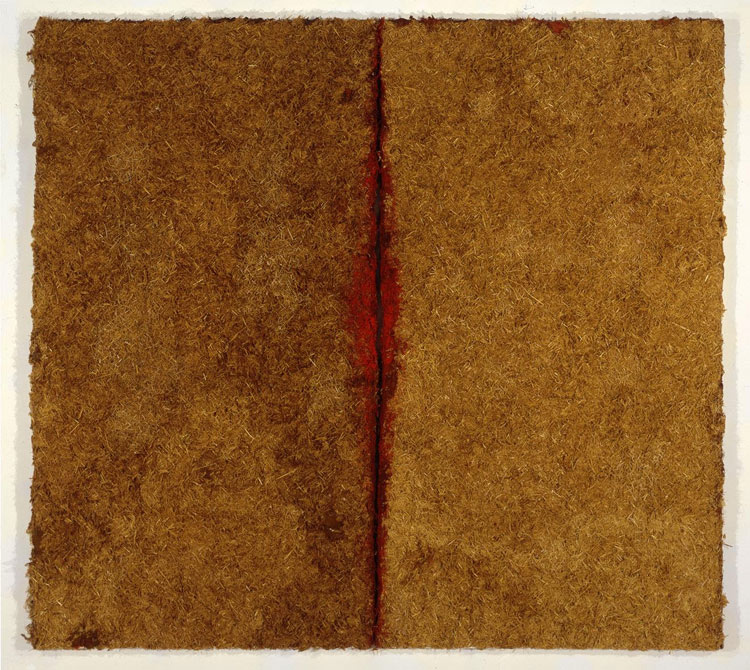 Alexander Gray Associates presents its third exhibition of work by Harmony Hammond (b.1944), Harmony Hammond: Inappropriate Longings. Featuring an installation and a selection of mixed media paintings and works on paper, the exhibition highlights the artist’s practice during the 1990s. These works’ use of materials as visual metaphors for desire, violence, place, and the effects of time, foul weather, and foul play continue Hammond’s ongoing project to “bring content into the world of abstraction.”

Hammond’s material metaphors referencing both the body and the landscape create “troubled sites,” what The New York Times art critic Holland Cotter has called “…. implied narratives of innocence lost through political, domestic, and psychological violation.” Combining oil paint, canvas, and paper with non-traditional materials such as latex rubber, linoleum, straw, leaves, and hair, along with weathered objects salvaged from abandoned farms, she constructs works that occupy a space between painting and sculpture while hinting at transgressions and violence within the domestic setting.

Central to the exhibition is the large tableaux Inappropriate Longings (1992). The installation combines a triptych of oil paint, latex rubber, and linoleum with a metal gutter, a water trough, and dried leaves attached to or placed in front of the painting. The words “goddamn dyke” incised into the skin-like latex of the triptych interject a violated bodily presence into the work that challenges both the heteronormativity of rural America and abstract painting. As Hammond writes, “There’s a sense that something happened, but what? The painting is material witness to a crime scene giving clues of events and actions not fully revealed.”

Hammond continues this evocative material experimentation in other works in the show. In the diptych Untitled (1995), for example, she uses straw and red paint to call up multiple bodies almost touching. Writing about the work, she states, “It’s about the meeting place, the crack, the space between. The tension of uneasy juxtaposition. A site of negotiation.” Cumulatively, the works in the exhibition continue Hammond’s post-minimal engagement with materials and process and a survivor aesthetic that began with her fabric sculptures in the early 1970s while also anticipating her materially informed paintings of the last decade.

Hammond’s work is in the permanent collections of the Whitney Museum of Art, New York; Metropolitan Museum of Art, New York; the Museum of Modern Art, New York; the Walker Art Center, Minneapolis, MN; the Brooklyn Museum, NY; the National Museum of Women in the Arts, Washington, DC; the Art Institute of Chicago, IL; the Phoenix Art Museum, AZ; the New Mexico Museum of Art, Santa Fe; and the Wadsworth Atheneum, Hartford, CT, among others. Her archive is in the permanent collection of the Getty Research Institute, Los Angeles, CA. She has received fellowships from the John Simon Guggenheim, Joan Mitchell, Pollock–Krasner, Esther and Adolph Gottlieb and Art Matters Foundations, the New York State Council on the Arts, and the National Endowment for the Arts, among others. Hammond’s book, Wrappings: Essays on Feminism, Art and the Martial Arts, (TSL Press, 1984) is considered a seminal publication on 1970’s feminist art. Her groundbreaking book Lesbian Art in America: A Contemporary History (Rizzoli, 2000) received a Lambda Literary Award, and remains the primary text on the subject. In 2013, Hammond was honored with The College Art Association Distinguished Feminist Award. She received both the College Art Association’s Women’s Caucus for Art Lifetime Achievement Award and Anonymous was a Woman Award in 2014.