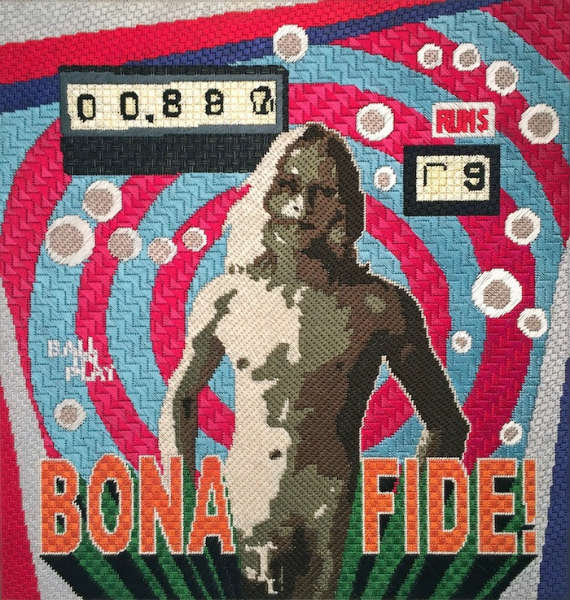 The new visions and voices in Queer Threads, uniquely expressed through craft traditions, expand on Leslie-Lohman’s commitment to examining the diversity of the LGBTQ experience through art,” says Hunter O’Hanian, Executive Director. In doing so, curator John Chaich notes, “Using craft to celebrate and critique identity and community is very queer in all senses of the word-unusual, political, and personal.”

Wikipedia about the artist: “Maria E. Piñeres is a Colombia-born American artist who lives and works in Los Angeles, CA. She is represented by DCKT Contemporary in New York City and Walter Maciel Gallery in Los Angeles where she will have her sixth solo exhibition in early 2011. Her work, mostly embroidery, has been exhibited at the Museum of Art & Design in New York City.

The artist’s work often consists of homo-erotic imagery taken from vintage pin-up magazines combined with vivid, sometimes complex, textile pattern backgrounds. However, she first became widely known through her series of needlepoint celebrity mug shots which was first exhibited in 2005. This series included portraits of celebrities such as Robert Downey Jr., Paris Hilton, and Michael Jackson, as well as a portrait of Jack White which was later shown in V magazine. The artist’s interest in the subject came from a desire to show the celebrity in a most vulnerable moment, without the protection of stylists and agents. These haunting images end up revealing a naked humanity in these often idealized subjects.”