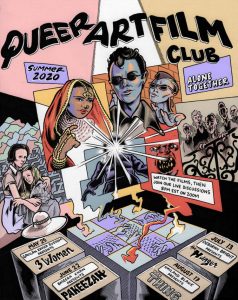 Organized by curators Adam Baran and Heather Lynn Johnson, this special “stay-at-home” season of the long-running screening series, titled Queer|Art|Film Club: Alone Together, has been reformatted in the style of a digital book club. Alone Together will consider the secret queer pleasures of watching movies alone and reckon with questions of safety and isolation that shape queer lives on a daily basis—not only during global pandemics, but throughout our entire lives.

Queer|Art|Film Club has been reformatted in the style of a digital book club: viewers are invited to watch films on their own before joining guest presenters online for an interactive discussion.
The curators are Adam Baran and Heather Lynn Johnson. The presenters are: Gavilán Rayna Russom, Baseera Khan, Deborah Bright and Nayland Blake.

See the programme of Alone Together

About QUEER|ART|FILM Club in New York

QUEER|ART|FILM is a monthly screening series, traditionally held at IFC Center, in which special guest LGBTQ+ artists present and discuss the films that have most inspired them.