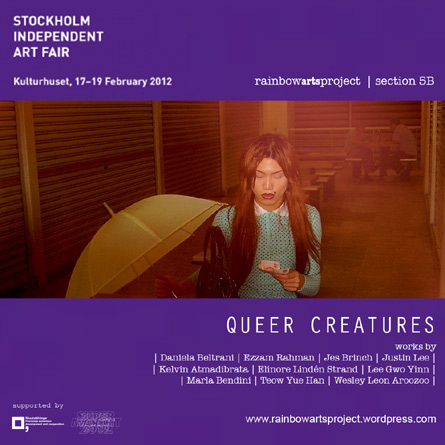 Queer Creatures / What makes a man
Elinore Lindén Strand, Swedish artist and queer woman describes her art project Queer Creatures / What makes a man, which is at display at the exhibtion, “I focus on different masculinities and on the freedom of not following norms of the physical gender. I started to collect images of boys and men – images which stands out and show alternative masculinities, but also images which adher to the western ideal of how a man must look and how handsome he must to be.
The woman has been presented at an object throughout the art history, but to make images that objectify a man, to study their bodies is almost a tabu. To make an image of a man is an adventure, a new hobby, which opens open for new ideas and lines of thought. In my collages I mix old and new, fine and ugly, fashion and waste paper and rubber…”

About rainbowartsproject (RAP)
Started in 2009, rainbowartsproject (RAP) aims to document, develop and promote queer culture primarily in the visual sector, starting small in Singapore and within the region. RAP is constantly looking into issues relevant to minority groups in particular sexual minorities- Lesbian, Gay, Bisexual and Transgender (LGBT) and social rejects when it comes to being queer and different.