Suspended at Pi Artworks in Istanbul 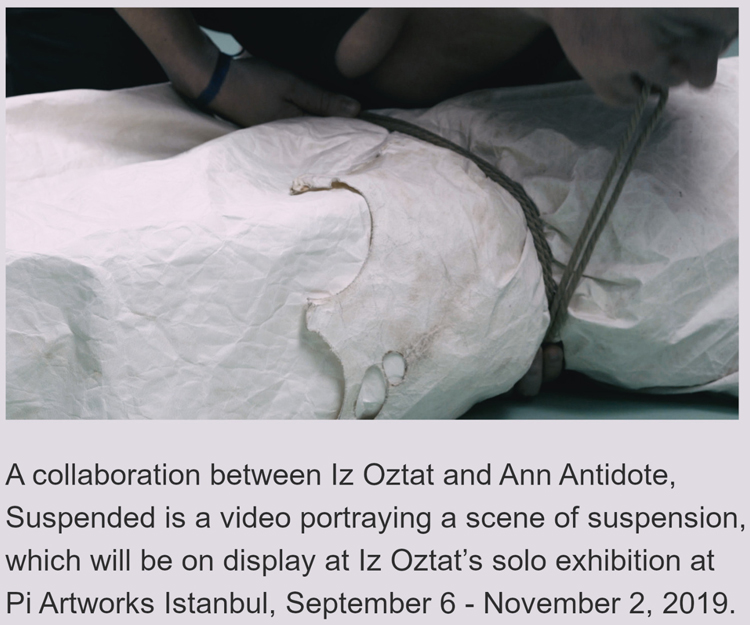 Iz Öztat’s practice engages with diverse forms and media defined by her research on the return of the supressed past, tracing what has been lost, and negotiating official narratives through the possibilities of fiction. Collective processes are also central to her practice.

Suspended, the video after which the exhibition is titled, presents a collaboration between Iz Oztat and Ann Antidote, portraying a scene of suspension. As a response to freedom of expression being suspended in public sphere, Oztat explores being a body without agency through her own performance. The scene, negotiated through a consentual contract, interrogates the power dynamics experienced in daily life. The body of the submissive is wrapped, tied and suspended by the dominant in a white parchment that resembles both a swaddle and a shroud.

Ann Antidote from the Strange Life of the Savages is an autodidact DIY artist, active in the fields of rope art, video, installation, sound and performance. She has been active in the politics of collective life forms, and queer, sex-positive lifestyles as valid, viable and respect-deserving options.

Iz Öztat performs on multiple fronts such as making, gathering, writing, translating, hosting and mediating. Although her work is dependent on the context within which it is produced, she revisits certain subjects: convergence of water and freedom, return of the suppressed past in the present, potentials of fiction in constructing historical narratives and ideological implications of display.