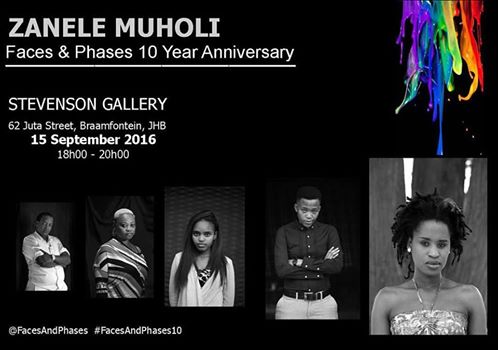 Two days after South Africa (SA) marks a decade since the introduction of the Civil Union Bill in the National Assembly, South African photographer Zanele Muholi will celebrate her own 10-year milestone, documenting black lesbians and transgender individuals from SA and beyond.

The images are captured as part of her black and white portrait series titled Faces and Phases (F&P). The Civil Union bill was drafted to provide “civil partnerships” for same-sex couples in SA. As an emerging artist at the time, Muholi was tired of sitting around while her community remained undocumented, absent from visual history. This drove Muholi to pick up her camera and document her community. Stevenson Gallery in Braamfontein is expected to be a full house when Faces and Phases10 exhibition opens on September 15 2016 at 18h00 – 20h00.

As reiterated in the past, the number of participants featured in the acclaimed Faces and Phases is based on quality rather than quantity. From the more than 250 portraits Muholi captured since taking that first image of Busi Sigasa at Constitution Hill, this award-winning photographer is now throwing her energy and focus into producing follow up shots of her participants as they go through various phases in their lives. 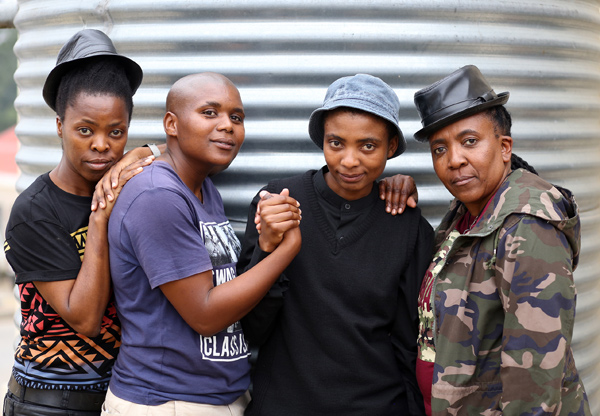 ‘The journey has been long and hard, all participants are history makers who are positioned differently in politics, economy and society,’ states Muholi. Thinking about how F&P reaches a decade when our country commemorates 60 years since the iconic 1956 women’s march, 40 years since the 1976 student uprising, 20 years since the adoption of our constitution and 10 years since the legalisation of same sex marriage leads to many questions for Muholi.

‘We are the children, grandchildren and great-grandchildren of those women who marched to the Union Building to challenge an unjust system. Were there lesbian women among that crowd?

What narrative would they share with us today?’ Some of the participants featured in this exhibition were members of the Chosen FEW soccer team that travelled with Muholi to the Chicago Gay games in 2006.

Muholi admits that working on this series is exhausting emotionally, physically and financially but acknowledges that an archive of this magnitude is not built overnight. The photographer is humbled by participants who have taken the risk by sharing their time and faces despite coming from repressive African countries. The series not only celebrates women, but also diversity by being conscious and mindful of the many citizens who continue to go through gender transition.

Faces and Phases brought joy and fulfilment to Muholi while she remains committed to growing the series. Muholi also shared about the highlights of the project, ‘the most interesting period is when F&P participants meet in different places and spaces, when we travel together locally and abroad. I get excited when I see people presenting in different events and when we come together to share skills like it was done during the Yithi Laba conference, which brought together F&P youths. People continue to progress in their personal lives and this series has produced new photographers,’ states Muholi. In reflecting about the past ten years, this KwaZulu-Natal born artist is proud of the work she produces, ‘it is the only project in Africa of its kind. It is a success, milestone and record breaker.’

Faces express the person, and Phases signify the transition from one stage of sexuality or gender expression and experience to another. Faces is also about the face-to-face confrontation between myself as the photographer/activist and the many lesbians, women and trans(wo)men I have interacted with from different places. Photographs in this series traverse spaces from Gauteng and Cape Town to London and Toronto, and include the townships of Alexandra, Soweto, Vosloorus, Khayelitsha, Gugulethu, Katlehong and Kagiso.

Faces and Phases is an insider’s perspective that both commemorates and celebrates the lives of the black queers I have met in my journeys. Some of their stories gave me sleepless nights as I tried to process the struggles that were told to me. Many of the women I met had been violated and I endeavoured not to exploit them further through my work. I set out to establish relationships with them based on a mutual understanding of what it means to be female, lesbian and black today. Faces and Phases is about our histories and the struggles that we continue to face.

These words continue to hold true. By exhibiting the initial portraits alongside those taken more recently, this celebration will map the trajectory of each individual’s growth, highlighting the fact that they are participants – not subjects.

As Faces and Phases is a living archive Muholi will also be introducing the audience to new participants through never before seen images.