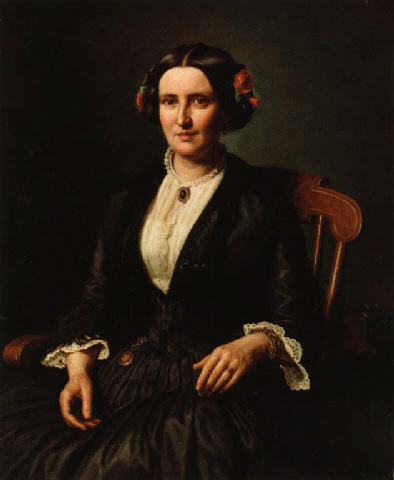 ‘Woman with rose in her hair’ (self portrait?) painted by Aasta Hansteen (December 10, 1824 – April 13, 1908), Norwegian painter and feminist – courtesy of Nasjonalgalleriet, Oslo, Norway.

The Faculty of Theology at the University of Oslo writes ‘Hansteen was an early feminist lay theologian, painter and writer and a pioneer in the women’s suffrage movement in Norway. The daughter of Christoffer Hansteen, a prominent professor of astronomy and geophysics at the University of Oslo, Aasta Hansteen received her art education in Copenhagen and Düsseldorf. (…)

Aasta Hansteen was a “first wave” feminist, and part of a long tradition of women’s rights movements in Norway. As a result, Norway was in 1913 the first sovereign state in the world to grant women full parliamentary rights. The priestly office of the Church of Norway, however, did not formally include women until 1938.’