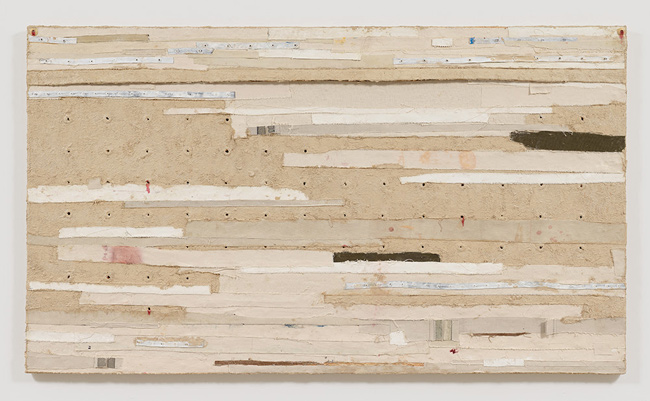 Alexander Gray Associates presents its second exhibition of work by Harmony Hammond (b.1944), including paintings, monotypes and ink drawings dating from 2014 to the present. A pioneer of feminist and queer discourse, Hammond’s earliest feminist work combined gender politics with post-minimal concerns of materials and process, frequently occupying a space between painting and sculpture — a focus that continues to this day. Her thick near-monochrome paintings of the last decade participate in the narrative of modernist abstraction; at the same time they insist on an oppositional discourse of feminist and queer content. Their focus on materiality and the indexical, suggesting topographies of body derive from and remain in conversation with her feminist work of the 1970s.

In her recent paintings featured in the exhibition, Hammond grommets a field or grid of holes into her canvases. Layering patches of fabric, straps and grommets intermittently with oil paint, she builds textured near-monochromatic surfaces of earthy reds, deep-blacks, dusty beiges, and creamy whites, activated by light and cast shadow. The gridded field of grommeted holes physically opens the painting surface alluding to layers, spaces and histories buried below as well as body orifaces. A close examination of what at first glance might appear to be minimal monochrome grid paintings, reveals a disturbance or rupture as underlying layers of color are visible through cracks, crevices and holes, interrupting both surface and grid. For Hammond, “It’s about what’s hidden, muffled, covered up or over, pushing up from underneath, asserting itself, suggesting agency and voice.”

In Bandaged Grid #1 (2015), she applies fraying strips of leftover canvas to evoke a bandaged body, noting, “a bandage always implies a wound. A bandaged grid implies an interruption of the narrative of the modernist grid and therefore, an interruption of utopian egalitarian order… a precarity. But also, however fragile, the possibility of holding together, of healing.”

Works on paper are also a key part of Hammond’s oeuvre. The irregular surfaces she achieved in her paintings are present in her grommeted monotypes, which art writer Lucy Lippard calls grommetypes. Linking the works on paper to her painting practice, she comments, “It’s about accumulation, not blending.” Also on view are two suites of Hammond’s Ledger Drawings (2015), text-based drawings on ledger book pages. In these works, Hammond’s practice as a critic and art historian becomes self-reflexive. The drawings repeat words and phrases that the artist has noticed used to denigrate late-career, female artists — “obsolete,” “vintage,” “your generation,” “dragon lady,” “get your due,” and “diva.” Re-inscribed on paper originally intended to inventory commodities or services, Hammond exhausts the words’ intended meaning, rendering them powerless, and reclaiming these phrases on her own terms.