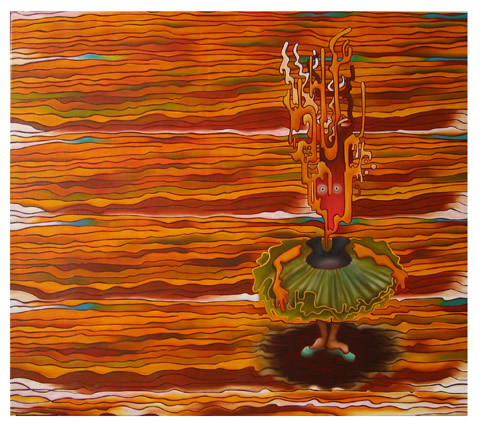 has been living in the thriving art and LGBTQ communities of Berlin since 1991. She became a German citizen in 2006.

Michèle Marie Bonnarens: “Art tart and I are the same, and I’m just a “Mensch”. I don’t think I decided to become an artist. I’ve always just been who I am. But I have decided to use the gifts I have to converse and build community with others. The tricky part is doing that from within a western economy.

You may call my images surrealist. I think that the movement known as the surrealists was quite sexist, and propagated theories that are too dogmatic for my taste. I don’t really see myself as coming from that tradition, though I think it was a fascinating experiment. Personally, I see a strong medieval European influence, though I can’t thank the 20th century western artists enough for opening my mind. 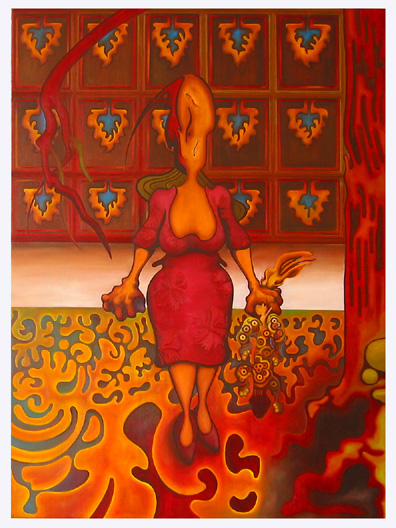 The ideas for my paintings come in many situations: just washing the dishes, waiting on line somewhere, sitting a minute and staring into space; while reading the newspaper or absentmindedly making marks on paper… Then they take up a life of their own and the women in them nag themselves into existence. That’s my job – to put them into the world. Then they go off and live their lives. I approach the world from my position as lesbian woman, but both the words lesbian and woman, and the people they shape are historical. I do think that I paint women and their experiences. But I hope one day, it will be impossible to understand my works in this way.

My work is guided by a religious instinct both in its production and its content. The act of painting is a type of individual meditation. A recurring symbol within my work is “Woman”. “Woman” has a religious sense within my work because the cultural associations around Woman make this symbol a critical point for reflecting on ourselves and our place in the universe, whatever our biology may be. My paintings offer a place for the viewer to enter into their own meditation on the structuring of experience.

In relation to the works of art that lesbians are consuming, I feel like an insider: I think my paintings speak to something deep within women’s experience of her own definition as woman — for herself and for others. But in relation to the works of art by other lesbian artists, from what I have seen, I fear I am something of an outsider. However, in the end, I paint abstract paintings, which are constructed in such a way that viewers need to hold multiple points-of-view in order to read them, and have fun with them. This is something that comes easily to the queer community, but this pleasure in seeing is open to all.”

– as told to Birthe Havmøller, editor of Feminine Moments, December 2008.