Portraits Of The Survivors – A History Of The Rromas 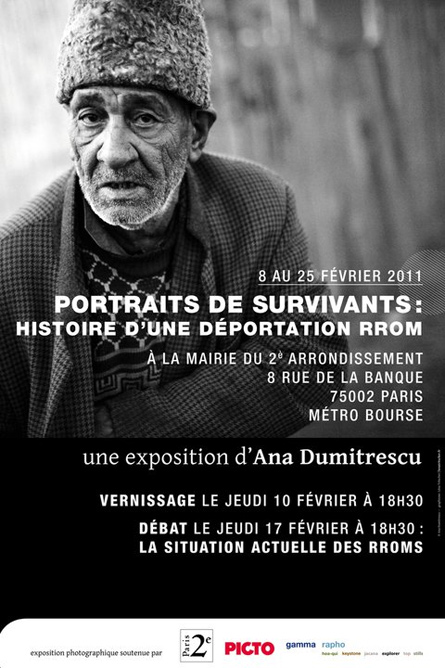 The above exhibition by photographer Ana Dumitrescu is about the survivors of the holocaust in Romania, where Rromas (Gypsies) was sent to the concentration camps during the Second World War.  The show runs February 8 – 25, 2011 in Paris.
Ana tells: ‘I met these survivors and I made a report. The evidence gathered will be read by actors during the opening and there will be a concert of Gypsy music.’

Join Ana At The Opening Of The Exhibition

About Ana Dumitrescu
Ana Dumitrescu is Franco-Romanian photographer and lesbian based in Paris, France. She works with documentary photography and has made assignments for magazins and photography agencies.  She focuses on marginalization of the less popular groupes of people in the Europe and makes black and white portraits of people belonging to marginalized communities such as the Gypsies. Her works also include series about African contract workers fighting for their rights in France and homosexuals in Romania.