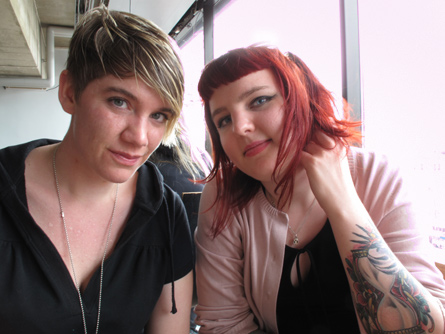 Last week I met independent curator and photographer Elinore Lindén
Strand and painter Frida Gustavsson for lunch and a chat about queer
art at Kulturhuset in downtown Stockholm. They are busy working on a
queer exhibition together with some friends. The exhibition will be coming up later this summer in Stockholm durring the Stockholm Pride.

The theme of the Stockholm Pride festival 2010 is ‘power’. The organizers of Scandinavia’s biggest pride festival encourage all
participants to look at the positive and negatives ways the power is displayed in Sweden today in order to bring discrimination out in to the open. One of their mottoes are that every one can make a difference. Power means different thing to different people, groups and movements, so they leave it up to your personal interpretation.
The exhibition by Elinore and Frida’s queer art group Gardet will be featuring the artists’ individual interpretations and visualizations of power, power play and roles.

Frida is painting portraits of historic persons, queens and other famous women, who have a seat in our shared memory as women of power. Beauty is associated with power. It is a kind of free ticket to power, unless you are blond, as the archetype of the blond woman is considered to be less bright than a woman with dark hair.

When looking at the old paintings of queens and royal families you often see that these women are painted as beautiful women. Perhaps they have been beautified by the painter? Frida’s paintings of queens
and powerful women are not portraits of super (beautiful) women, but women, who are aging like all of us. Her queens could be anybody, except for the fact that these women happens to have been born noble as members of royal families or gentry of Europe. 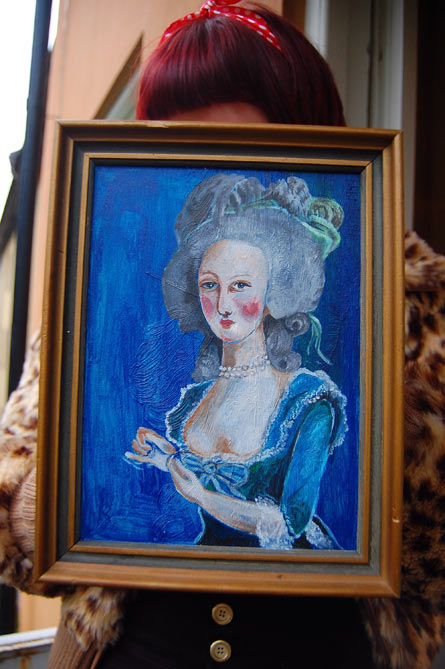 Painting: ‘Marie is bored’, acrylic on wood by Frida Gustavsson

Elinore questions the way the main stream media’s are visualizing the woman: May we explicitly show a woman’s sexuality, when she is a mother or a mother to be? She points out that the Madonna complex is very common in our mainstream iconography. The Madonna being the sacred mother, whose sexuality is non existent. Visually we are coached into see the mother as an asexual being. She is not a lover, but just a beautiful passive mother caring about her child. Elinore’s photos are not timid, but intimate and erotic. Go see more artworks featuring interpretations of queer power at the Gardet’s show in Stockholm.

Gardet show their artworks at Galleri Kocks in cooperation with Stockholm Pride and art:up, Stockholm’s first and largest arena for queer art. The Gardet queer artists are: