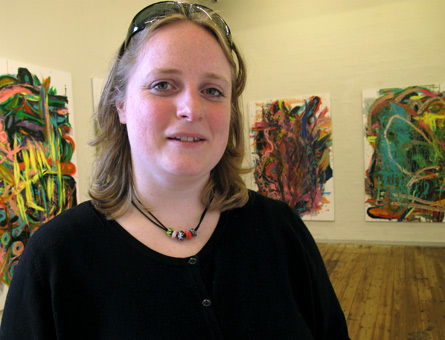 I met painter and lesbian Henriette Hellstern-Kjøller at Kunsthallen Brandts in Odense, Denmark, where she is presenting her latest art project titled ‘Sexualities‘. The installation ‘Sexualities’ is a part of the Funen Art Academy’s graduation show ‘World in My Eyes’.

'Sexualities' is an installation consisting of 12 big abstract paintings and an audio recording of the sounds of the artist herself in her studio, while she painting the works. During my tour of the exhibition Henriette Hellstern-Kjøller revealed to me that each painting has been made with inspiration from photo. The paintings have titles such as ‘Homosexual woman with wife, kids and car’, ‘Asexual man with beard in the kitchen’, ‘Female-To-Male in the woods with dog’, ‘Bisexual woman with glasses and purse’ and it didn’t take me long to imagine what these the photos might look like… However, as her paintings are more about sexual energy than physical appearance of the holders of the different types of sexuality, they are not ordinary portraits, nor do the hold any figurative elements. They are big bright playful abstract works.

The different ‘sexualities’ are presented as equal and as the titles suggest her works represent sexuality in ordinary situations. Henriette paintings visualizes of types of people, we all know i.e.heterosexual man, homosexual woman, male-to-female, etc. It not because she want us to focus on the stereo types as ordinary or extraordinary expressions of sexuality nor as people belonging to the mainstream versus a sub culture, but just as different self-declared sexual identities of equal value. Henriette coaches you into an abstract world and an abstraction i.e. an abstract way of thinking, which may make you hesitate making the usual moral judgement of sexuality, i.e. that one painting may be ‘better’ than the ‘other’… But is you favourite painting a representation of the best type of sexuality? 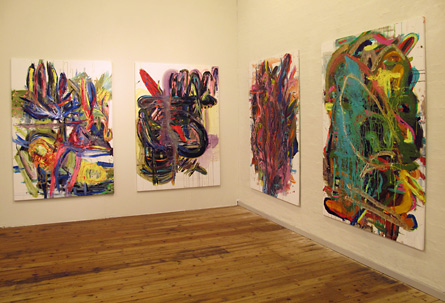 Installation view of  ‘Sexualities’ by Henriette Hellstern-Kjøller, Kunsthallen Brandts, Odense, Denmark. The paintings (from left): “Homosexual woman with wife, kids and car” , “Asexual man with beard in the kitchen”,  “Female-To-Male in the woods with dog” and “Bisexual woman with glasses and purse”.

Her paintings makes me reflect on the fact that we are all human beings and one type of sexuality or sexual identity + gender is not that different from the other. And at the same time Henriette’s project challenges my notion of how to visualize sexuality. When I ask her, why she has painted a big patch of bright colors on the canvas? She compared her paintings to ‘snow angles’ (i.e. the game played by children, where you lie down in the snow and move arms and legs to make the imprint/image of an angel in the snow) or like Leonardo da Vinchi’s drawing of the man in a square (i.e. ‘Vitruvian Man’, a study of proportions). The paintings visualize sexuality as energy. 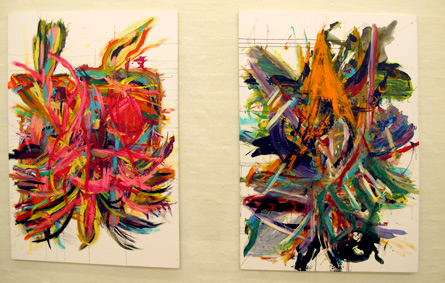 “Male-To-Female in the city for a dinner” and “Homosexual man with his family on vacation” from  the installation ‘Sexualities’ by Henriette Hellstern-Kjøller, Kunsthallen Brandts, Odense, Denmark.

Henriette describes her creative process in this way: ”These portraits are not only paintings showing persons colors, backgrounds, sexualities, everyday doings and emotions, it is also paintings made in an expressive performative action painting style. The way I create this is by performing the emotions I get when I feel these persons stories from the photos. I believe that these paintings are also abjects, a channel of colour coming from my body, going out into my hands holding the paintbrush, throwing, moving, scattering the paint, the colors onto the canvas’

She also points my attention to the sound of the installation. She wants the visitors to be aware of the painter’s physical presence, when looking at the painting. Henriette is fascinated by the meeting between the body as sounds (non-visual) the body as a painting (visual image/portrait) and the viewers’ physical bodies.

I love the installation’s ‘documentary’ recording with sound of her deep breaths and the brush strokes on the canvas as she struggles with making the larger than life paintings. The recording makes me reflect upon my own sexuality. It reminds me of intimate moments and the pleasure I feel, when being so close to a lover or dance partner that I can hear the soft sound of this person breathing. 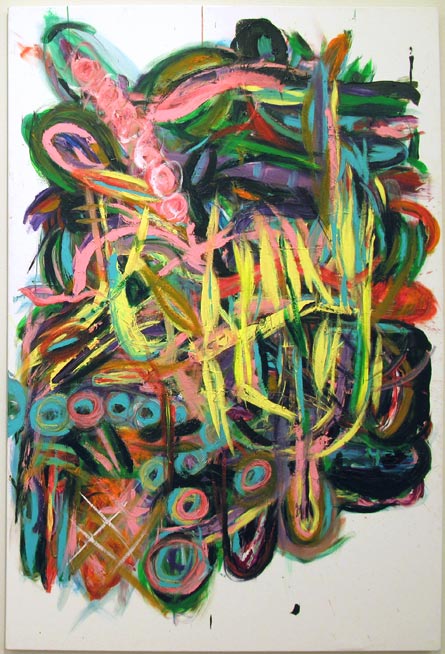 ‘Bisexual man who is bold and has fish’, painting by Henriette Hellstern-Kjøller