Tumble and Bloom by Rebecca Levi

Press release by Leslie-Lohman Museum of Gay and Lesbian Art 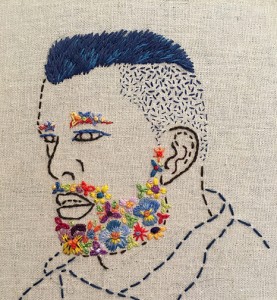 Tumble and Bloom explores expressions of modern masculine and gender non-conforming performativity through the traditional medium of embroidery. Levi both celebrates and challenges the association of “women’s work” with thread-based craft, creating meticulously sewn portraits of queer bodies, as in the series #100tumblrbearscantbewrong. Using botanical motifs in her colorful flower beards, Levi playfully subverts gender signifiers, such as facial and body hair, and embraces multifaceted, shifting, and emerging identities.

Rebecca Levi is a NYC born and based artist. Her work has appeared in Queer Threads, which originated at the Leslie-Lohman Museum before traveling to other venues, and Stitch Fetish at The Hive Gallery in Los Angeles. Solo shows include those at the Bureau of General Services in New York and the Main Street Museum in White River Junction, Vermont. Her embroidery was also featured in the Visual AIDS Play Smart series.