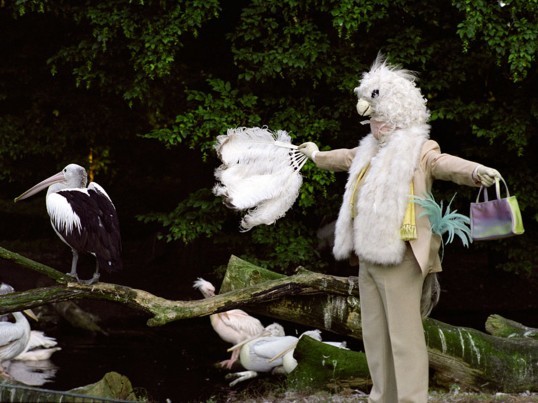 Press photo: Charming for the Revolution, courtesy of Tate Modern and the artists.

The work of Pauline Boudry / Renate Lorenz reflects on the interplay of sexuality, sexual perversions and representation, continuously returning to unrepresented or illegible moments in history.

The artists will introduce and reflect on each of the works followed by a Q&A after the screening. The film programme features:

“With a wink to Jack Smith, the New York underground performer and filmmaker from the 60’s to the 80’s, as well as to the history of queer and feminist calls such as “wages for housework!”, the film recreates the “housewife” as an ambiguous figure with an open future.”

No Future / No Past is a film installation and part of a series of two films that both work on punk archives from the period between 1976 and 2031 investigating the radical negativity, the self-destructiveness and the dystopia of this past moment.
The ” four musicians (Ginger Brooks Takahashi/”Men”; Fruity Franky/”Lesbians on Ecstasy”; G. Rizo; Olivia Anna Livki), and a choreographer (Werner Hirsch)–stage and practice outmoded acts and sentiments of the past that have been deemed useless. The musician-performers provisionally take over the positions of four musicians from the punk movement: Darby Crash, the gay band leader of ”The Germs”, Poly Styrene the singer of the very influential band ”X-Ray-Spex”, Alice Bag, lead singer of the LA Band ”The Bags”, and Joey Ramone, singer of the band ”The Ramones”.”

“The film „normal work“ asks whether the cros- sings of social hierarchies of class, gender, and „race“ that Hannah Cullwick staged and that she obviously desired have today become generalized into a paradoxical requirement in the field of labor.”
In the film we watch the performer Werner Hirsch / Hannah Cullwick attempt to imitate poses of the 19th century photos of Hannah Cullwick as a maid, a slave, a bourgeois man and a woman.
Werner Hirsch / Hannah Cullwick orients him/ herself to his/her memory, to a mirror, or to a „model“ that is not in the image, or to instructions that are called out to him/her, also from outside the space of the frame.

Pauline Boudry & Renate Lorenz say about their work: “Our works often revisit materials from the past, usually photographs or films, referring to and excavating unrepresented or unlegible moments of queerness in history. These works show embodiments which are not only able to cross different times, but also to draw relations between these different times, thus revealing possibilities for a queer futurity.”

Charming for the Revolution: A Congress for Gender Talents and Wildness

The above event is a part of Charming for the Revolution: A Congress for Gender Talents and Wildness February 1 – 3, 2013. To mark to start of LGBT month next February, Tate presents a series of events in The Tanks at Tate Modern which considers pressing questions around contemporary sexual and gender politics. This three-day event series includes films, performances and a symposium featuring work by Pauline Boundry & Renate Lorenz, Carlos Motta, and Wu Tsang. The series seeks to highlight a range of recent projects by this vibrant group of artists, activists and thinkers who have shaped the discussion of sexual and gender representation into one of the most exciting and urgent cultural debates.

Read more about Charming for the Revolution: A Congress for Gender Talents and Wildness