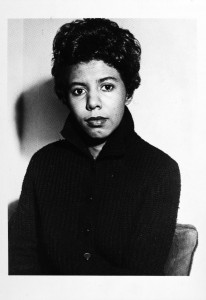 A new exhibition, Twice Militant: Lorraine Hansberry’s Letters to “The Ladder,” examines a lesser-known aspect of the life of the award-winning author of the landmark play A Raisin in the Sun, who died in 1965 at the age of thirty-four. The exhibition features documents and publications addressing Hansberry’s identification as a feminist and a lesbian, and will be on view in the Herstory Gallery of the Elizabeth A. Sackler Center for Feminist Art from November 22, 2013, through March 16, 2014.

Hansberry’s thoughts on the burgeoning gay rights and feminist movements in the late 1950s were articulated in several contributions she made to The Ladder, the first subscription-based lesbian publication in the United States. Twice Militant will feature her letters to the editor, a short story published under the pseudonym Emily Jones, and early issues of The Ladder, on loan from the Gay, Lesbian, Bisexual Transgender Historical Society in San Francisco, as well as related primary documents from the Lorraine Hansberry Papers at the Schomburg Center for Research in Black Culture, New York.

In a 1959 radio interview with the late Pulitzer Prize-winning writer and radio personality Studs Terkel, Hansberry remarked: “Obviously the most oppressed group of any oppressed group will be its women,” pointedly adding that those who are “twice oppressed” often become “twice militant.” In her letters to The Ladder, written in 1957, Hansberry focused on her own identity, articulating the interrelated social and political struggles of women, lesbians, and African Americans.

A Raisin in the Sun, which debuted when Hansberry was only twenty-nine, was inspired by her family’s battle against housing segregation laws in 1930s Chicago. The first Broadway drama written by an African American woman, the production won the New York Drama Critics’ Circle Award for best Broadway play of 1958-59, was later made into a film starring Sidney Poitier, and was posthumously adapted as a Tony-winning musical. Writing and activism were connected throughout Hansberry’s life, from her early 1950s work for Paul Robeson’s anti-imperialist newspaper, Freedom, to her final published project, The Movement: Documentary of a Struggle for Equality (1964), a book of civil rights photography commissioned by the Student Nonviolent Coordinating Committee (SNCC) for which she wrote the text.

Founded in San Francisco, The Ladder was produced, published, and distributed by the Daughters of Bilitis, one of the first lesbian organizations in the United States, between 1956 and 1972. The first nationally distributed periodical of its kind, The Ladder traces within its pages an important history of critical debate, creative expression, community-building, and explorations of lesbian identity.

The Herstory Gallery in the Elizabeth A. Sackler Center for Feminist Art presents exhibitions related to The Dinner Party by Judy Chicago, on long-term view in the adjacent gallery. The iconic work, celebrating the achievements of women throughout history, includes a floor on which appear the names of 999 mythical and historic women, including Lorraine Hansberry.