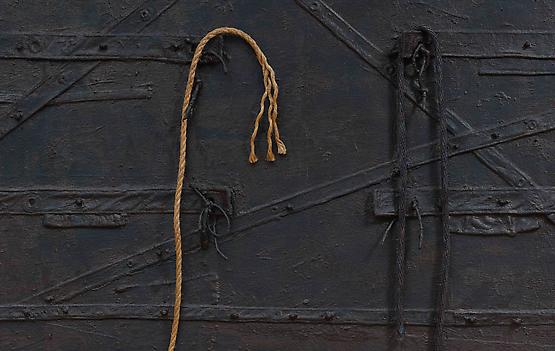 Alexander Gray Associates is pleased to present its inaugural exhibition with Harmony Hammond, her first one-person exhibition in New York since the 1990s. Emphasizing Hammond’s long-standing commitment to process-based abstraction, the exhibition includes paintings and works on paper from the past five decades, with a focus on recent works. A fully-illustrated catalogue will accompany the exhibition.

Since emerging as part of the early 1970s wave of Feminist art and activism, Hammond has infused her painting, sculpture, and mixed-media artworks with social concerns, inviting Feminist and Queer conversations around artistic explorations of process and craft. Early works, including Chrysanthemums (1975) and The Black Leaf (1976), demonstrate Hammond’s interest in the painted object, and methods of process, layering and removal. Assemblage works including Untitled (1971), a painting on a shopping bag with fabric attachments, provide grounding for The Gift (1992–93), an enigmatic collage of vintage linoleum and a clock face retrieved from an abandoned farmhouse combined with human hair. In Flesh Journal II (1993), text is cut into cast latex pages; this embedded information is a precursor to Hammond’s latest monochrome works.

In her most recent work, Hammond pushes the surface of the subject and the painting’s relationship to the viewer. In Red Bed (2011), Blanco (2012–13) and Rib (2013), canvases are wrapped with pierced and grommeted straps, then painted in layers of oil and wax until it is difficult to discern sequence, materiality, or gesture. At once built-up yet ephemeral, the paintings, and related monotypes, defy traditional art and challenge canonical histories of painting and sculpture.

In her 2010 writing on painting, Hammond positioned herself: “I don’t accept that painting is an over-determined site, a privileged domain of the authoritative masculine voice, or that monochrome painting is necessarily a dead end—the inevitable conclusion of a history of art as a hierarchy of purifications…. While these paintings engage with (and I like to think, interrupt and resist), the history of modernist painting—and more specifically, narratives of abstraction and monochrome—they come out of post-minimal and feminist concerns with materials and process rather than modernist reduction…. My work is not pure, isolated, authoritative, universal, self-referential, self-sufficient, or removed from social function. I invoke references and associations. I welcome the world outside the painting edge into the painting field.”

Harmony Hammond (b. 1944) attended the University of Minnesota from 1963–67, before moving to New York in 1969. She was a co-founder of A.I.R., the first women’s cooperative art gallery in New York (1972) and Heresies: A Feminist Publication on Art & Politics (1976). Since the mid-1980s, she has lived and worked in Galisteo, NM. Hammond’s artwork has been exhibited nationally and internationally in venues such as: the New Museum, the National Academy Museum, the Whitney Museum, the Brooklyn Museum, the Bronx Museum, and MoMA P.S.1 Contemporary Art Center, in New York; the Museum of Contemporary Art and the Hammer Museum in Los Angeles, CA; the Walker Art Center in Minneapolis, MN; and the Neue Galerie in Graz, Germany; among others. Her work was featured in the exhibitions: High Times, Hard Times: New York Painting 1967–1975 (2006) and WACK! Art and the Feminist Revolution (2007). Her work will be the subject of the upcoming monographic exhibition Becoming/Unbecoming Monochrome at RedLine in Denver, CO in 2014. Hammond’s work is in the permanent collections of the Metropolitan Museum of Art, the Museum of Modern Art, and the Brooklyn Museum, New York; the Walker Art Center, Minneapolis, MN; the Art Institute of Chicago, IL; and the Phoenix Art Museum, AZ; among others. Hammond’s book, Wrappings: Essays on Feminism, Art and the Martial Arts (TSL Press, 1984) is considered a seminal publication on 1970s Feminist art; her groundbreaking book Lesbian Art in America: A Contemporary History (Rizzoli, 2000) received a Lambda Literary Award. In 2013, Hammond was honored with the College Art Association’s Distinguished Feminist Award.

Alexander Gray Associates is a contemporary art gallery in New York. The Gallery presents exhibitions focused on artists who emerged in the 1960s, 1970s, and 1980s. Influential in political, social and cultural spheres, these artists are notable for creating work that crosses geographic borders, generational contexts and artistic disciplines. Alexander Gray Associates is a member of the Art Dealers Association of America.