‘Abject and Object’ An Art Exhibition By Henriette Hellstern-Kjøller

August 21 - September 18, 2010 Galleri NB in Viborg, Denmark presents 'ABJECT AND OBJECT', an exhibition by Danish artist and lesbian Henriette Hellstern-Kjøller. Henriette invites you to join her at the opening of her exhibition.

Statement by Henriette Hellstern-Kjøller:
The body is the main subject of this series of works. My exhibition features six paintings and one video all of which scrutinizes the abjects and beauty of the body. I have examined what ‘abject’ means to me. For Paul Mccarthy it is equal with the body fluids shrouded by an empirical performance, for me abjects equals body movements and moods turned into colours. I am also fascinated with mutual repetitive work, and see Judith Butler’s thesis about the heterosexual matrix as a core theme in my works. Thus I have chosen to comment on the woman as an object in my video Touch My Tra La La, as I feel that we subconscious repetitively objectify the woman. 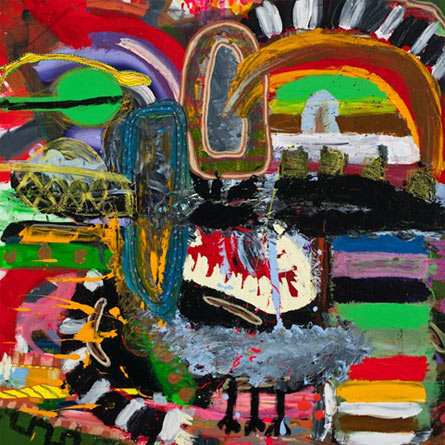 ABJECT NO 4, painting by Henriette Hellstern-Kjøller, 2010

About Henriette Hellstern-Kjøller
Henriette Hellstern-Kjøller is a 4th year student at the Funen Art Academy in Denmark. She works with paintings, video, performance, installations and other medias, and has exhibited in Denmark and abroad, among other places in San Francisco, USA, Berlin, Germany, and Kvinesdal, Norway. Her works has also been selected for several censored exhibitions in Denmark such as the Charlottenborgs Forårsudstilling and the KP-Århus.
Henriette is not afraid of dealing thoroughly with controversial subjects such as equal rights, power, sexuality and good versus evil. By this exhibition at Galleri NB’s NBex Project Room in Viborg, Denmark, she accelerates with her extensive palette and her kitschy video style.