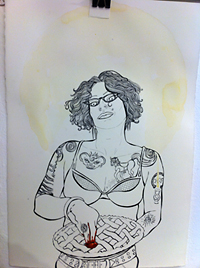 ‘We [Laurie Toby Edison and Marlene Hoeber] have been invited by Birthe Havmoeller to write a brief explanation of the cultural issues at play in the recent controversy over the Hide/Seek  show at the National Portrait Gallery in Washington D.C., after seeing my post about it at Body Impolitic. Obviously, there is too much to discuss here all at once, so I will limit myself to a summary of the political and social factors at play and a little bit of analysis.

The first thing is to understand a little about the Conservative / Religious / Right in the US. One of the confusing things about American politics is that at its founding, the Republican Party was the liberal party of Abraham Lincoln in the mid nineteenth century, opposed to slavery shortly before the Civil War (1860).  Both political parties in the US mostly represent business interests, but must rely on a voter base to stay in office. The Republican party voting base is now (predominantly) fundamentalist Christian conservatives.

Space and time do not allow a full explanation of this phenomenon, but the important thing to take note of is that Republican rhetoric is peppered with statements about limiting the reach of government. Despite the fact that these statements sound like those of Thomas Jefferson, who was suspicious of government power at the founding of the United States, they are in fact driven by a desire to remove government controls on business and to resist any act of government made on behalf of any minority.

Their desire for “small government” is inconsistent and is in truth a ruse to obscure a preference for some areas of public spending (military, pro-business subsidies, constitutionally questionable blurring of the lines between church and state) over others (social services, environmental and other business regulation, the arts). The fight against arts funding and the attack on particular publicly sponsored art events and exhibitions is a microcosm of the battles over these views.

The complaints about Hide/Seek and the subsequent removal of Wojnarowicz’s ‘Fire in My Belly’ must be seen in the context of the NEA fights of the late 1980s  as well as the current environment of American politics. Objections to the image of ants crawling over a plastic crucifix must be heard with Andres Serrano’s Piss Christ as a backdrop. We will set aside discussions of the work itself, which is well within the tradition of grisly images of Christ being used as a metaphor for human suffering. However, it is important to note that the complaints about Fire in My Belly are not actually complaints about the work. None of the accusations of anti-christian sentiment or obscenity hold true. This is about homophobia and little else. The photograph [by Annie Leibovitz] described by one of its detractors as “Ellen Degeneres grabbing her breasts” hardly lives up to what the mind conjures from that description.

The staff at the (publicly funded) National Portrait Gallery, where Hide/Seek (a privately funded show) is being displayed, capitulated to criticism by removing ‘Fire in My Belly’. The reasons for this cowardice are no doubt manifold, but one fear is likely predominant; the gallery staff fears that they can not win a public fight and will lose funding as has been threatened. They fear losing the fight because many in the American public do not care about art and many do not think that such things are important expenditures in a time of financial distress. They also fear losing the fight because in the age of television news, a short inflammatory description of an artwork travels much faster and farther than a nuanced analysis of its merits.

However, there are very strong protests against this censorship in the US arts communities, including mainstream institutions.  The Christian conservative movement is a minority among both voters and the population at large, but a highly energetic one.  The “opposition,” while larger, is much more diffuse and less focused.

It is important here to remember that the United States is a young nation that does not have the long artistic history of European countries. Art is not valued by Americans in the same way that Europeans value art. Public funding of the arts is taken for granted in most of Europe, but that is an extension of a tradition started by kings and churches who patronized artists to glorify their causes. Most of the American Christian sects tend to eschew grand ornament, and Americans tend to think that what kings do is not what an elected government should do.

“Art” is synonymous with “Elitist intellectuals and filthy queers” in the minds of the American Right. Art by queer artists, especially gay men, is symbolic to them of an imagined enemy seeking to dismantle all that they hold dear and (possibly more threatening) seeking to up-end the social order that not only gives power to white male Christians, but allows them to see themselves as normative.

Queer art calls in to question their assumption that most decent people are pretty much like them. It allows for the possibility of pluralism in an area that American Fundamentalist Christians are uniquely un-easy: sexuality. It also stirs a resentment for elitists (which means anyone who disagrees with them and speaks in complete sentences). The combination of these anxieties evokes anger and aggression that can rise to the level of violence or tireless political activism.

Sometimes I wonder if the reason “our side” is so often at a disadvantage in these fights is that we are not as motivated because we are less afraid of new ideas. Fear is a very powerful motivator’.

About Marlene Hoeber
Marlene Hoeber is a long time queer/kink/trans activist. She is the Director of Collections at the archive of the Center for Sex and Culture and blogs regularly at Body Impolitics and at her own blog Fukshot.