This Event is part of the queer group exhibition “Untold Stories”.

Videos
Karin Michalski: "Pasche & Sofia" (2003). 21'
‘Pasche and Sofia’ is a documentary filmed in a small village in Albania. Pasche is a so-called ‘sworn virgin’(South Slavic tobelija or tybelí, ostajnica “she who stays” or muskobanja “man-like woman”; Albanian virgjineshtë), which refers to a traditional social role in the highlands of Albania and Montenegro. ‘Sworn virgin’ is a female-born person who takes on the social (but not sexual) role of a man. They dress, work and live as men, but remain chaste and unmarried. Sofia and other villagers are interviewed about how they understand and accept Pasche.

Aurora Reinhard: "Boygirl" (2002),12' & "Female" (2003), 25'
Boygirl (2002) is a documentary based on interviews of three young females that all more or less look like boys. The girls tell how does it feel to construct one´s own identity without a clear forebild, how do they define their gender and how other people perceive them.
Female (2003) is a documentary about three extraordinary persons: Kia, Julia and Tiina who tell their story, a story of survival. They are male to female transsexual women. The idea of somebody having experienced life both as male and female was very striking for me. How does it feel to be suddenly a woman after being a male for 30 years? Were these women ever really men? 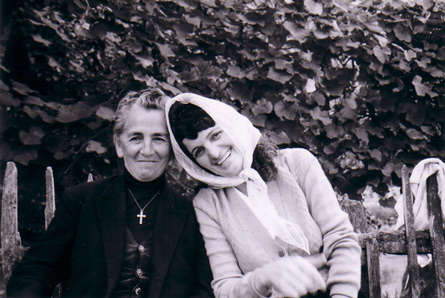 Film still from ‘Pashke and Sofia’ by Karin Michalski, Germany