Grab ’em by the Pussy

Text and images by Jannica Honey 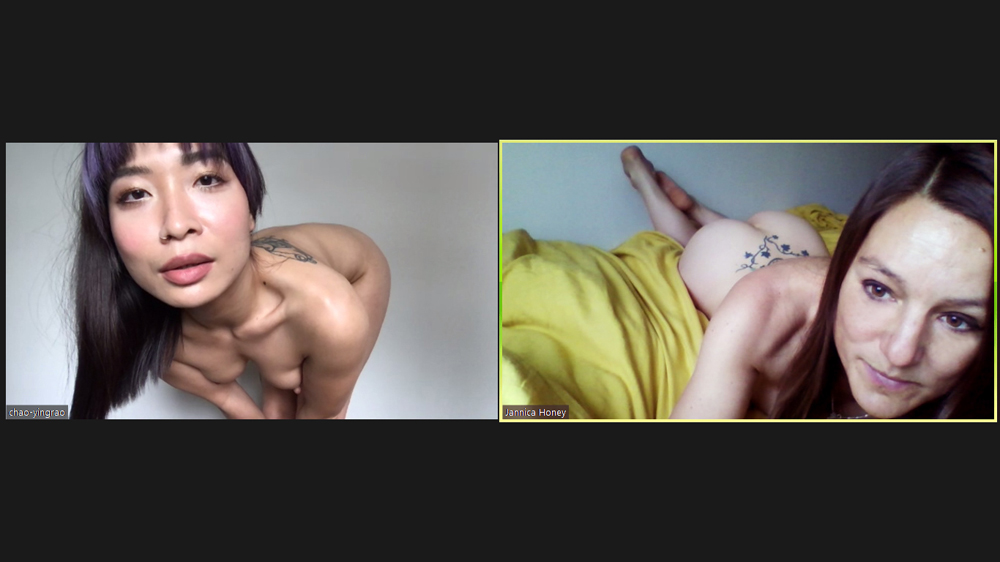 It was early spring in the middle of the first UK lockdown. You could hear the birds as they have never been heard before, loud and clear. The streets were quiet and people had already started to feel isolated and apprehensive about what would happen next.

Inside my Edinburgh flat, it was hot. Glasgow based artist Elizabeth and I was busy gazing at each other over zoom. We were discussing the female gaze. Who is looking at who and where was your initial gaze initiated? We didn’t only see the other in that space. I also saw myself there, next to her.

Already in 1977, Jacques Lacan (Lacan’s gaze) acknowledges that “things look at me, and yet I see them”. A couple of years earlier Laura Mulvey’s term the male gaze was used frequently. It represents not only the gaze of a heterosexual male viewer but also the gaze of the male character and the male creator of the film. This term described the viewers’ gaze and their position too.

I believe that the contemporary structures of power and dominance will establish whose eyes are patrolling you and eventually this gaze will be yours too. You will see yourself through the eyes of the governing powers (politics, religion, media and gender constructions) and not long after also identify yourself with their rendering of ‘you’. 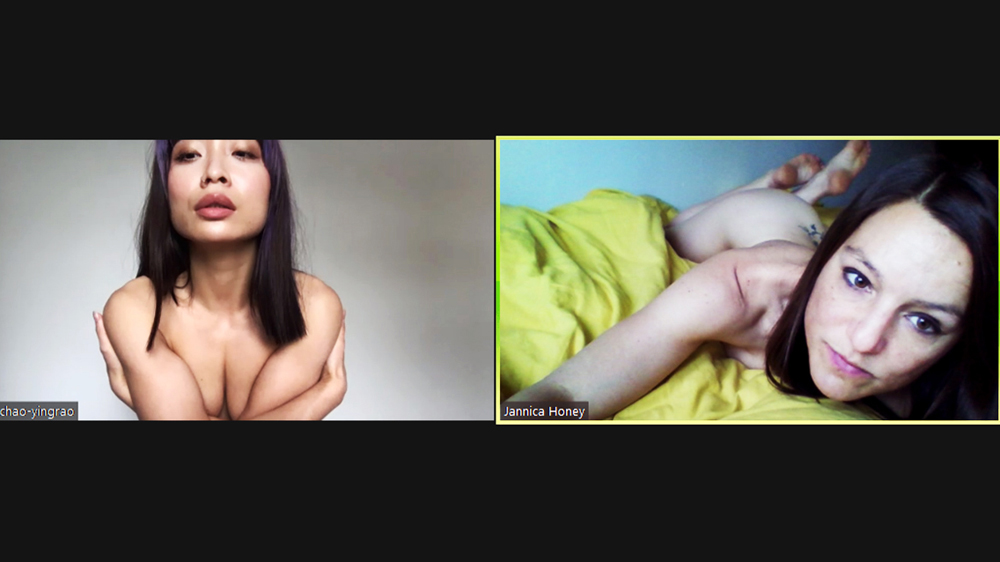 What has two naked women looking at each other through a webcam got to do with Trump?

Donald Trump (born on the 14th of June 1946) declared, “Grab ’em by the pussy.” On the 7th October 2016, during the 2016 United States presidential election these words were projected into the future. This was also when my photography exhibition When The Blackbird Sings was developed; it looks like that autumn, in 2016, it was when the whole world moved into a completely different chapter. Meanwhile, I was roaming the twilight, photographing nature and women creating the images about fertility, inner moons and representation, a sullen space opened in the public domain. Not only recognition of men in power, not only domineering but also a strange acceptance of bullying. Boundaries were pushed and the climax of this leadership was when a crowd of enraged people entered The United States Congress on the 6th January 2021.

Let me take you back to the gaze. Please remember ‘if you are what you eat’ then visual diet is also essential to recognise. Who created these images and what are they subconsciously telling me to think, to feel?

When I saw the first images online, I thought: what a bunch of clowns! It is so typical of the far-right, the forever heterosexual family. “friendly”, pro-life culture to be so homoerotic. It is like the horseshoe effect, you are what you despise, humans forever flirting with our hidden shadow-side.
Within an hour or so we had all been introduced to him, the infamous Jamiroquai wannabe. He who taught us what real manliness looks like at the start of 2021. A desperate last breath of old structures of control. Poor Mjölnir (Thor’s hammer) surrounded with other sporadically misplaced symbols and patterns on the chest of the intruder. Trousers hanging loosely on those thin hips and then the horns, a headpiece that the Vikings never wore. A riot which reminded me of a group of people who ended up at the wrong fancy dress party or, is that our first “gaze”? The first images that came out cemented so much, and so quickly.

The maker John Sullivan, aka Jayden X created the Shooting and Storming of the US Capitol in Washington DC. I watched a 39 minutes 36 seconds unbroken take of the mayhem. It ends with the death of a women. After watching this I realized that in these times of new expressions, it is crucial to contemplate what your eyes “eat”. To become aware of, not only the source of visual nutrition but also awareness of how it affects you. How the image flow on social media does, in the end, partly control you, and we have already experienced a lot of control last year. Social distancing, self-isolation, restrictions, a walk in the park becomes a WhatsApp call overlooked by Facebook. Humans don’t only feed their curiosity on social media. We also fuel our fear.

So, what is the fear? The “opposite”, isn’t it? Sometimes people end up identifying themselves through this: what they are not backed up by i.e., the “othering”. We need images to create this polished vision of black and white, dualism in a nutshell. The forever divided. What would unfold if we came together? Not only as humans but within ourselves.

We like to feel empowered and this is at the cost of the “other”. Here is the twist. I have been watching a lot of footage from the storming of the Capitol and I saw women in there, not many, but women just like me, angry and dis-empowered. There were also some people from different ethnicity. Please do not forget that the chairman of the Proud Boys, Enrique Tarrio is a Republican, supporting Trump even if, yes you know, how the Latinos doesn’t seem to be on the top of Donald’s Christmas list, or perhaps, it is just that? We have been filled with fake facts. In other words (not using Trump’s own words) it is like an intravenous therapy, a slow drip that goes directly into the core of you from places of power and slowly we are hydrated not only with beliefs about the other but especially about ourselves.

The far-right is a club, especially for the white, hetero-man. The male who is so much out of control emotionally that the only thing he is yearning for is some support and the ultimate control of the external world. This is often the result of an inner landscape in tumult. Two women looking at each other through a webcam has to do with all this. 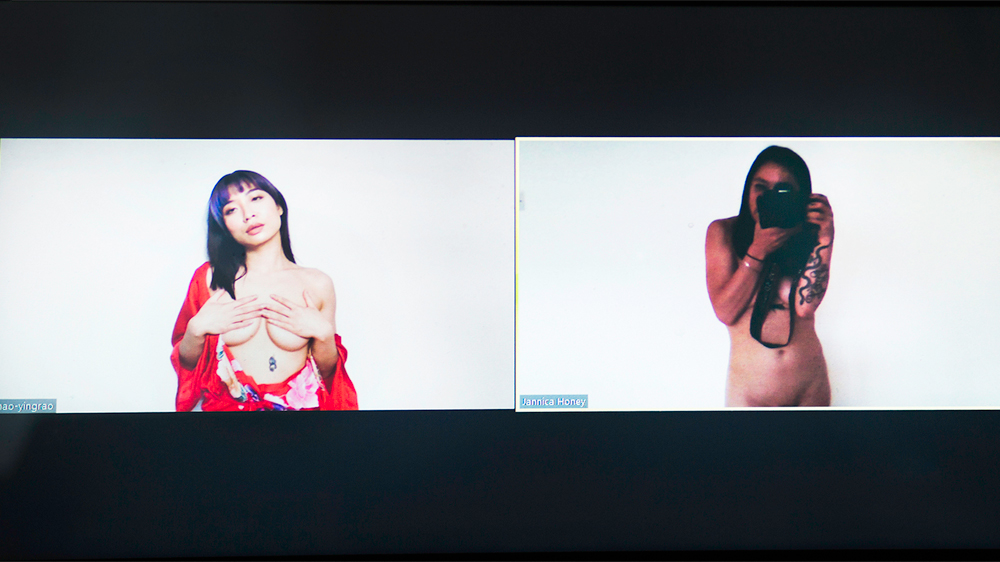 Elizabeth and I knew that we had to become conscious about our gaze and to finally reclaim it from administration systems. I usually call this place the patriarchal prison where women and men die in the hands of misogyny; women get murdered and men usually kill themselves. For us to become healthy we need a wholesome visual diet. Where the whole picture is visible, where we really see ourselves and finally become full/whole and healed. No more divide between whore and Madonna, women are everything else in-between these polarized goddesses and the same with men, you are so much boundless than a jacked-up Jamiroquai wannabe that in some kind of strange way became the symbol of this very unhinged group of people. If we become more attentive, would we not recognise ourselves, even in our enemy or have some of us been so “gazed at”, so underprivileged that we even lost our sight of what is and what is not us?

Donald, you said, ”Grab ’em by the pussy. You can do anything”, and I say, YES you can. We are witnessing patriarchal constructions falling apart and something new will arise, but first, let us hear Lady Gaga sing that song again. 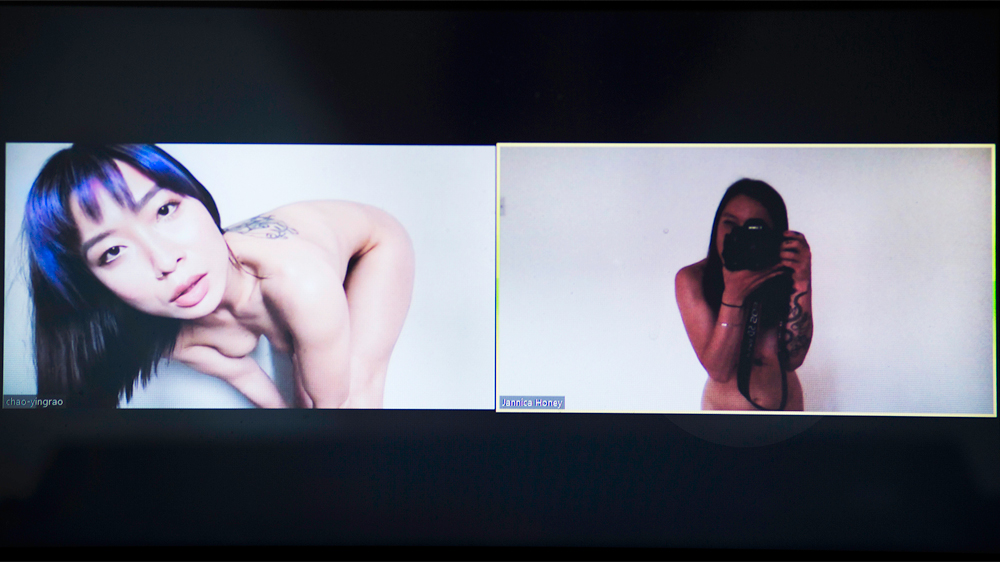 Swedish-born Jannica Honey moved to Edinburgh to study photography after completing a BA in Humanities (anthropology & criminology) at Stockholm University. A significant proportion of her recent work has focused on musicians with her photographs appearing in The Guardian, LA Times, Svenska Dagbladet, The Scotsman, Vogue, Dazed & Confused, Tank & Aesthetica Magazine.

Honey’s latest project, ‘When The Blackbird Sings’ is her most ambitious to date, she based my shooting schedule on the moon & channelled the earth’s natural rhythms into the work, explored her own connection to womanhood & femininity. The art project portrays the multiple aspects of the female cycle through photographs of women and nature (Sweden/Scotland). Honey is now collaborating with Feminine Moments as guest blogger in 2021, sharing her feminist observations and insights in the format of essays and micro-posts richly illustrated with her photographs.