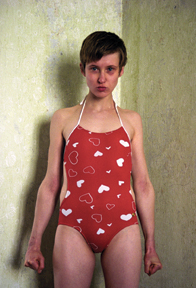 “Fontanelle Gallery is pleased to present Queer Gaze, a group photography exhibition featuring images of queer people by queer photographers. This show offers a new examination and response to theories of “male gaze”, as originally described by Laura Mulvey as the cinematic depiction of voyeurism and objectification of a female by a heterosexual male viewer. Queer Gaze explores the gaze from woman to woman or queer to queer, as well as the way that many photographers use their own visage or that of their friends to subvert traditional expectations of portraiture.

The act of taking ownership of one’s own identity and personal beliefs and how these beliefs are enacted in the public realm is a political act that helps shape modern feminism. Here we present a collection of perspectives and experiences that will be at once informative and titillating, while also empowering.

Feminist photographers exploring the theory of male gaze have often turned the camera on themselves, demanding that viewers take notice of their role of dominance in how they are presented and viewed. By utilizing elements of masquerade, role-playing and societal commentary as devices to investigate identity through self-portraiture, many photographers are able to explore their own personal politics. Clearly, the issue of self-representation is not restricted to literal self-portraiture. The issue is not what one looks like, but how and by whom one is represented.”