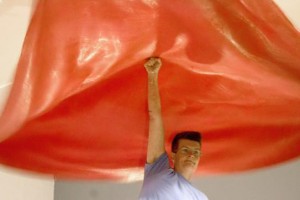 This talk will include examples from Coble’s work such as: Blood Script (2008) where hate speech was gathered from a public and tattooed inklessly on the artist’s skin as an act of solidarity; Fighting Cocks (2011) a durational performance in a locker room exploring queer masculinities in gendered spaces; Deferral (2013), a collective protest calling for the gay hero in face of the discriminatory practices that disallow gay men from donating blood; and Performing Defiance (2015) where the gesture of the raised fist combined with extensive glitter bombing was repeated ad absurdum pointing to the political power of “tactical frivolity”.