Kathleen Eileen Moray Gray (August 9, 1878 – October 31, 1976) was an Irish furniture designer and architect and a pioneer of the Modern Movement in architecture. Her furniture are on permanent display in the National Museum of Ireland – Decorative Arts & History, Dublin, Ireland. 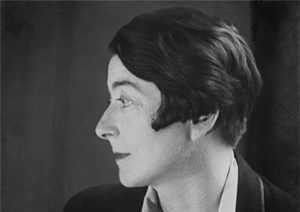 Wikipedia reads: “Gray was bisexual. She mixed in the lesbian circles of the time, being associated with Romaine Brooks, Gabrielle Bloch, Loie Fuller, the singer Damia and Natalie Barney. Gray’s intermittent relationship with Damia (or Marie-Louise Damien) ended in 1938, after which they never saw each other again, although both lived into their nineties in the same city. Gray also had for some time an intermittent relationship with Jean Badovici, the Romanian architect and writer. He had written about her design work in 1924 and encouraged her interest in architecture. Their romantic involvement ended in 1932. Gray remained active into her 90s, working up to fourteen hours a day refining her portfolio and organizing her various furniture designs and projects. Gray died in 1976, at the age of 98, in Paris.”