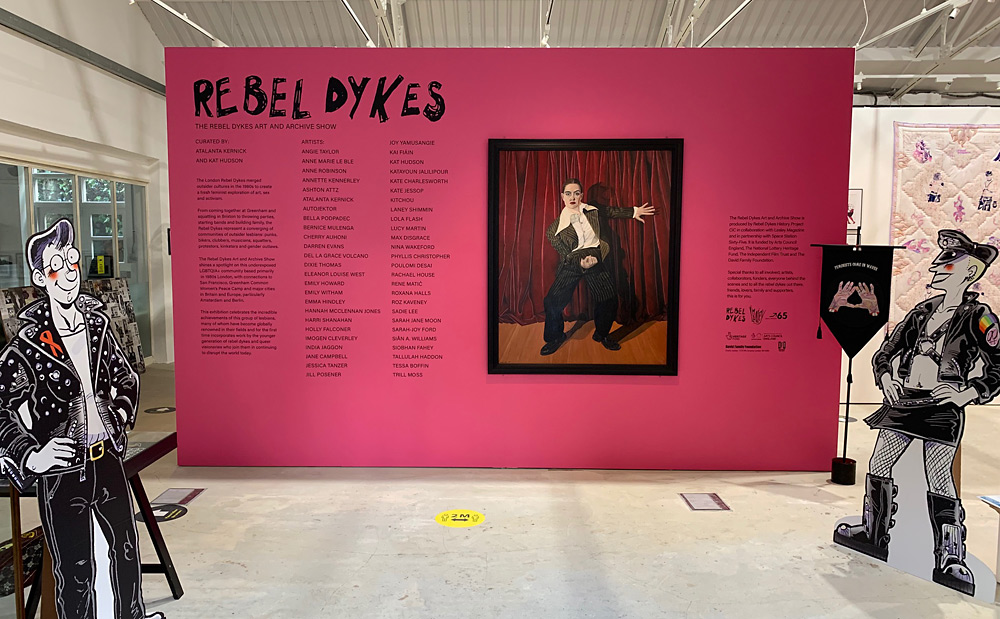 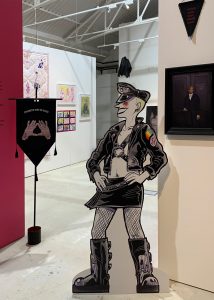 The Rebel Dykes originated in the 1980s as a group that merged outsider cultures to create fresh feminist explorations of art, sex and activism! Now, The Rebel Dykes Art & Archive Show brings this group of artists back together for the first time in almost 40 years and unites important underrepresented cultural histories with contemporary dyke culture; inviting a variety of younger artists to exhibit new works alongside the dykes who paved their way. This could well be the biggest and most engaging dyke community show of our time to date! 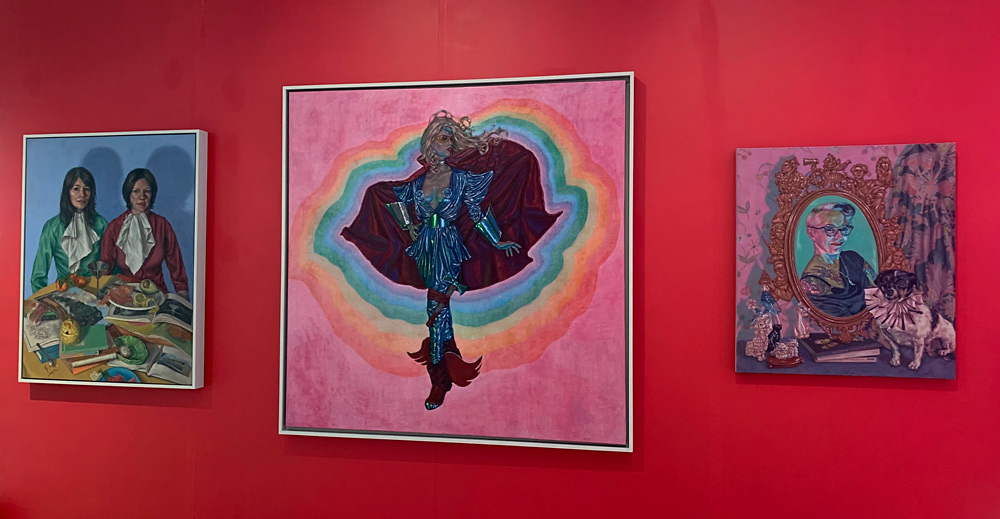 These dykes were rebels because they had to be; their human rights were being threatened by government actions such as clause 28 which defined homosexual love as a ‘pretend family relationship’ and they were often attacked in the street for their sexuality. The Rebel Dykes fought for their rights alongside the rest of the LGBT+ community including initiating prominent protest actions such as the storming of the BBC TV News studio in 1988 and abseiling into the house of commons. 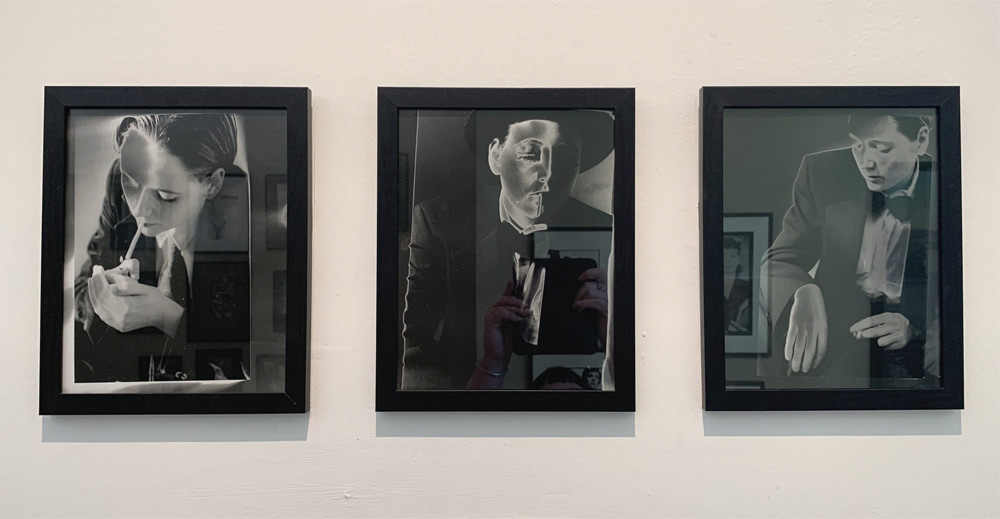 In 1987 a bunch of Rebel Dykes started an lesbian S&M club in Vauxhall, London called Chain Reaction where dykes wore leathers and performed for/with each other. There was mud wrestling! Spaghetti hoop fights! Amateur theatre, explicit performances (tying each other up, whipping, stripping etc) great music, bands, and lots of fun! A whole world of gender play and sex-positivity wrapped around a close dykes community. The club only lasted for a few years, but its affect of queer culture has been ongoing.

Proud to be Dykes! 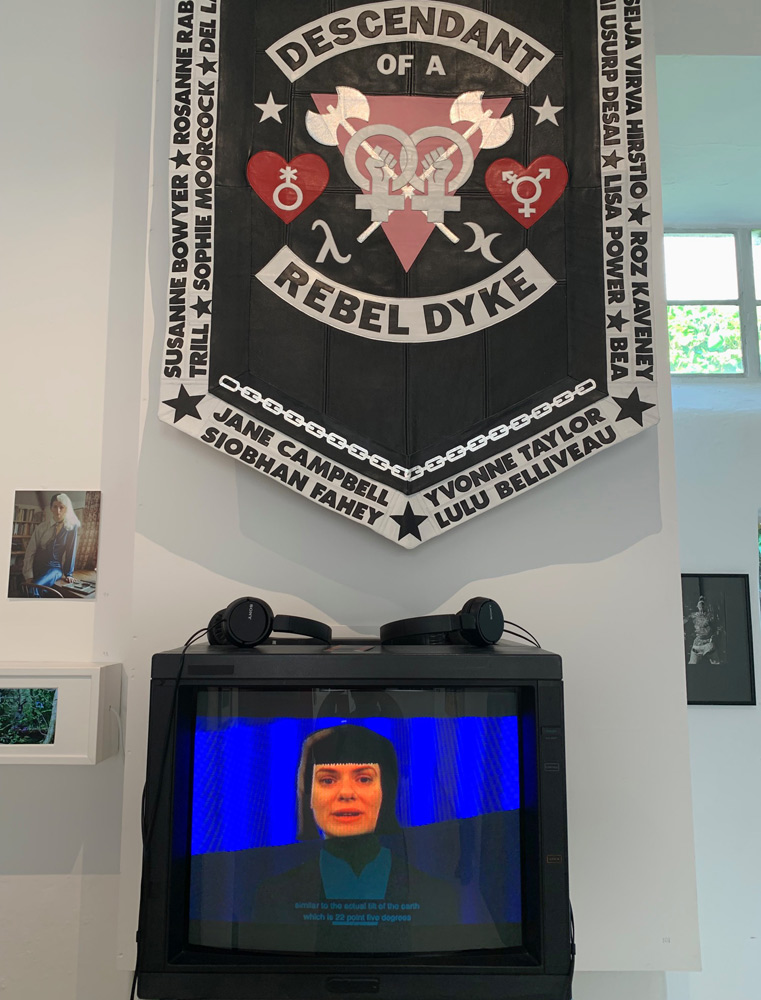 The Rebel Dykes had to be tough to stand up for themselves and stick together in the face of these oppressions, but they also had a lot of fun along the way! Del LaGrace Volcano’s sex positive lesbian photography book ‘Love Bites’ celebrated dyke sex and S&M! (It was banned from bookshops and even Gay’s The Word had to refuse to stock it due to threats of police raids). There was a Rebel Dykes motorcycle gang called the Black Widows, and many many dyke-punk bands including, Tribe 8, The Poison Girls, The Sluts From Outer Space and many more! They created and supported magazines and zines like On Our Backs (the first women-run erotica magazine from USA), Quim, Shocking Pink and more! They squatted together, threw parties with each other, formed families together, supported each other and paved the way for many of the freedoms we have today. They were and still are loud, proud, and unashamedly dykes. The Rebel Dykes Art & Archive Show showcases photography and artwork from this period as well as more recent work by the original Rebel Dykes group and younger lesbian and queer artists who have been inspired by them. 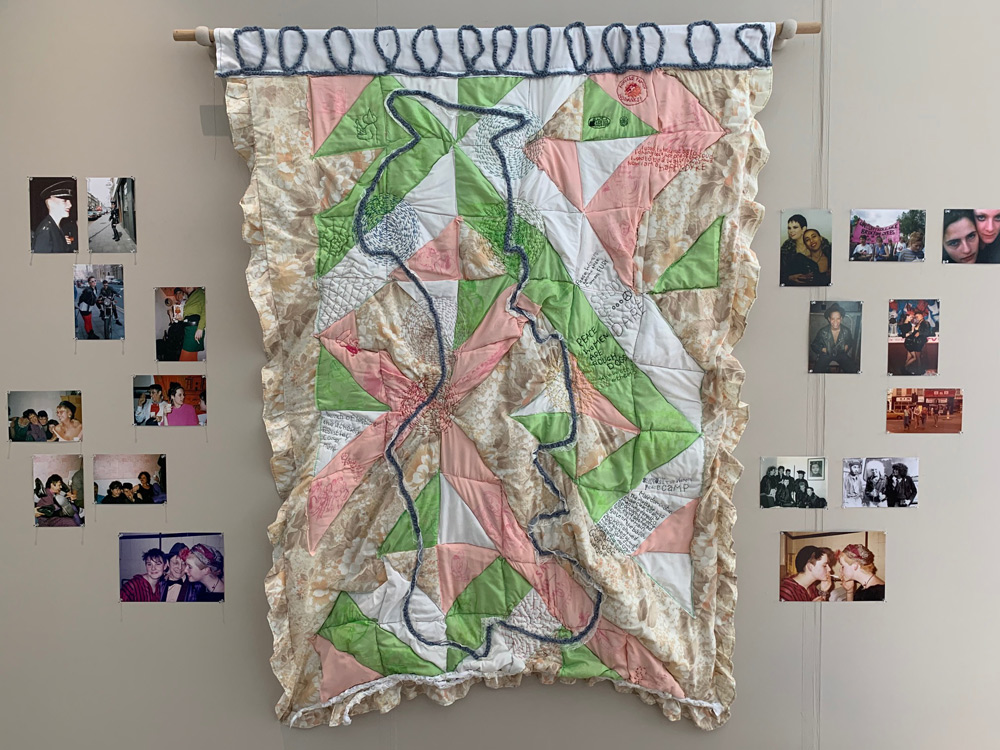 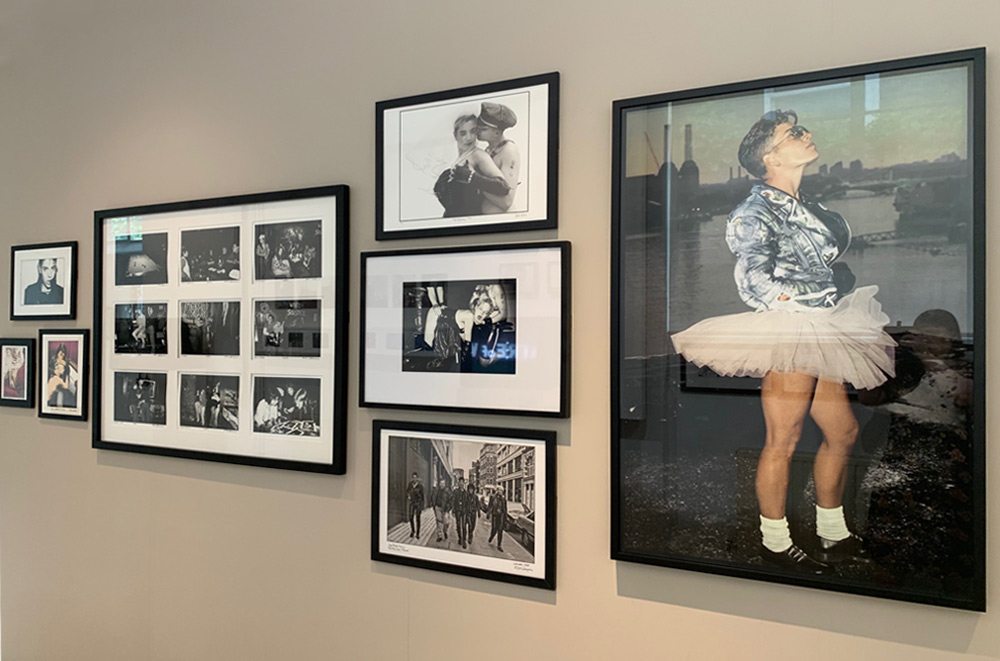 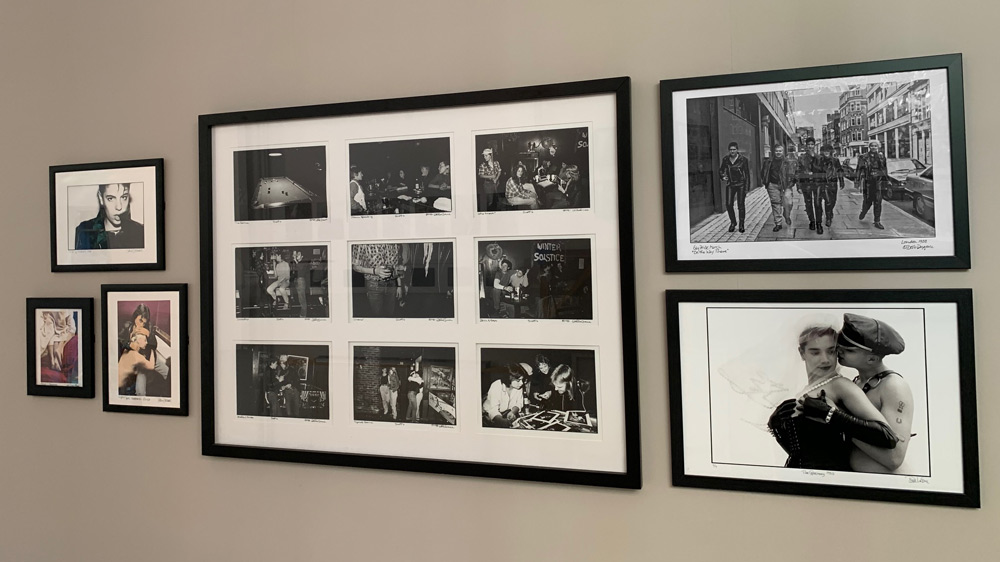 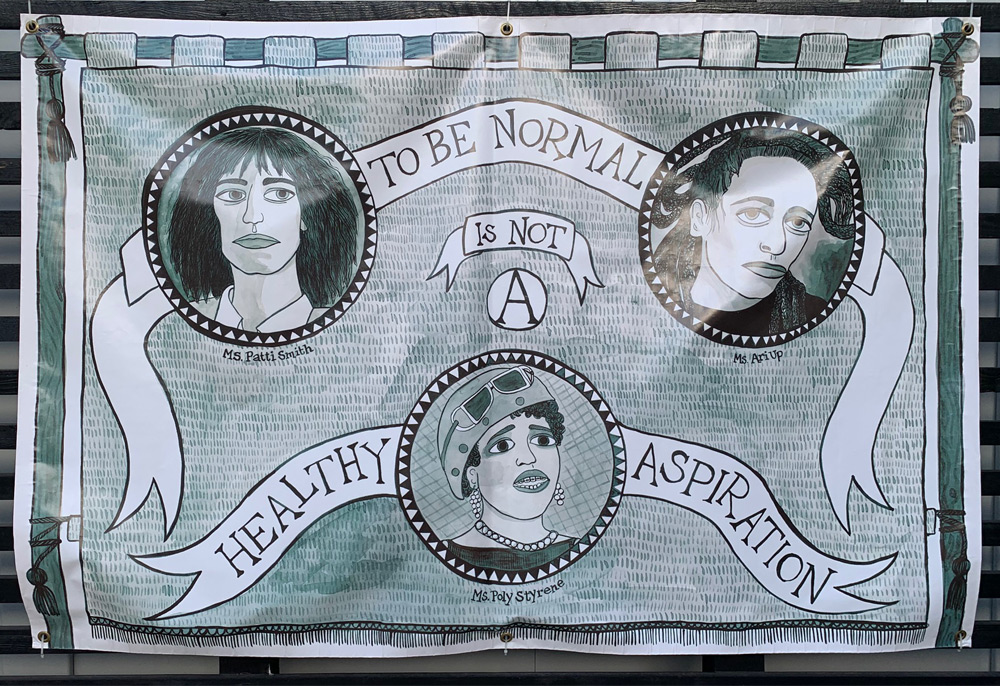 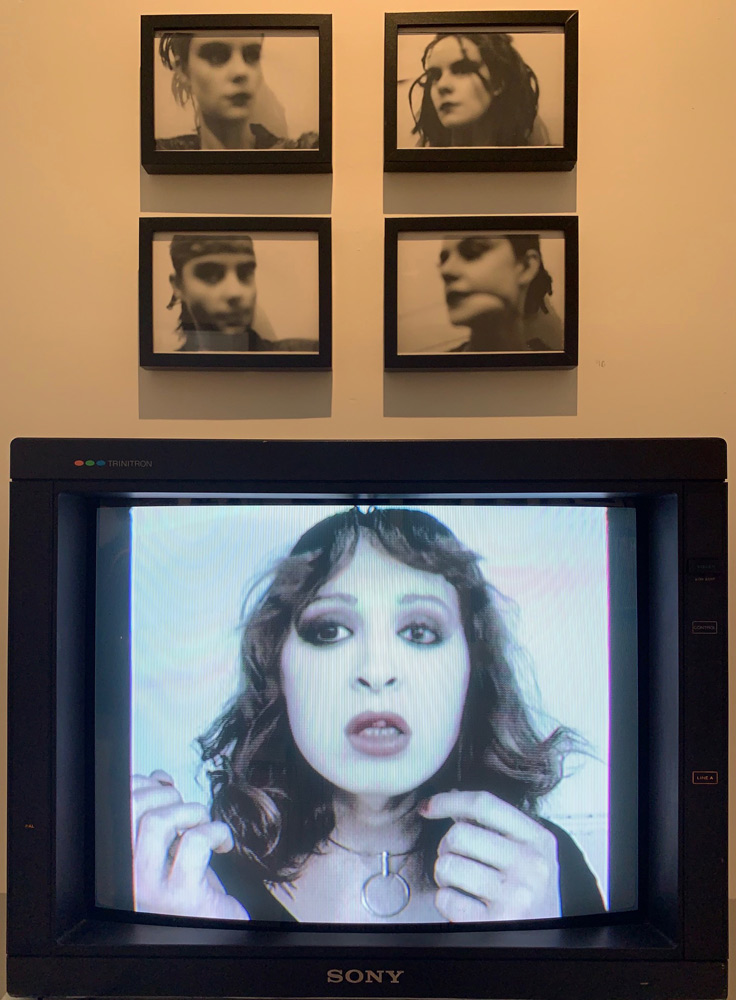 Rebel Dykes History Project collects, preserves and explores the history of the Rebel Dykes LGBTQ social justice and liberation movement. We use the Rebel Dykes archive to: stimulate intergenerational debate and community; inspire lesbian and bisexual women (cis/trans/nb); work with academics to ensure the Rebel Dykes are included in history; work with artists, musicians, filmmakers and performers to create artworks; reignite and reinvent Rebel Dykes community in order to fight isolation amongst younger and older dykes and allies.

Our archive collection is based at Bishopsgate Archive and is open for collections of heritage from all the Outsider Dykes (cis/trans/nb) living in London from 1981 – 1994. The dyke squatters, punks, reggae girls, sex workers, kink, gender warriors.

Our feature length documentary tells the story of the Rebel Dykes www.rebeldykes1980s.com It is showing around the globe at Film Festivals, and will be available later this year in UK from https://bohemiamedia.co.uk/